In tonight's episode, Preeta reaches home and is shocked to talk about what happened. Sarla tries to call up Karan to find out. 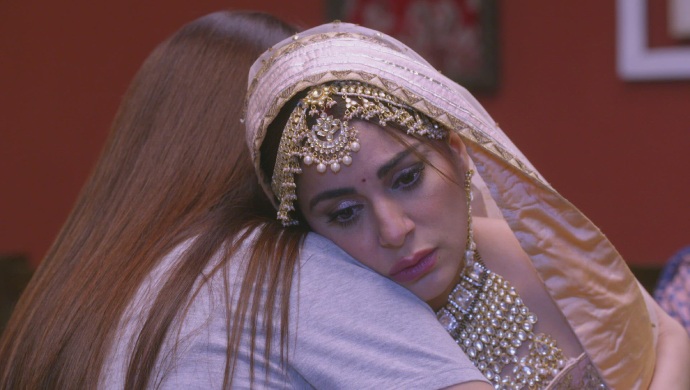 In tonight’s episode of Kundali Bhagya, Prithvi fights with Janki Bua, Srishti and Sammy. Instead they beat him up and tell him that Preeta is already on her way to the Luthra house. Karan tells Preeta that no one in his family knows that he married Preeta. He can leave her there and no one can tell him anything. Karan drives away while Preeta cries for him to stop. Sarla finds out Prithvi got drunk and tried to beat up her family. However, she still prefers Prithvi as Preeta’s husband rather than Karan. Sammy leaves the house promising to take care of Preeta.

In tonight’s episode, Srishti is about to make tea for everyone when she passes by the door and sees Preeta’s face. She runs to open the door and brings Preeta in. They asks Preeta what happened but she doesn’t say anything. Srishti claims that Prithvi must have done something. Sarla tries to call up Karan and find out what went wrong.

Karan is drinking on the bridge when Sammy passes by in a cab. He stops the cab and gets down to meet Karan. He asks where Preeta is. Karan tells Prithvi that he left Preeta and removed her from his life. Sammy says he is against Karan because Preeta is his bhabi now. Karan says this is all part of his revenge and making Sarla and Preeta cry.

Preeta tells her mother to not speak to Karan. She yells at Srishti saying Karan did everything. He reveals everything that Karan did to her. Sarla tells Preeta to go to her room and tells Daadi that she will teach Karan a lesson he will remember all his life. She leaves the house to go to the Luthra house.

Karan tells Sammy to get in the car and drive him back home. Sammy finds Preeta’s broken bangle in the car and looks disappointed at Karan. Sarla goes to the Luthra house to meet Karan. Sherlyn and Kareena try to stop Sarla. Will Sarla make Karan confess the truth and accept his crimes? Stay tuned to find out.