Prithvi tries to punch Karan while they fight over Preeta, but Karan ends up choking Prithvi. 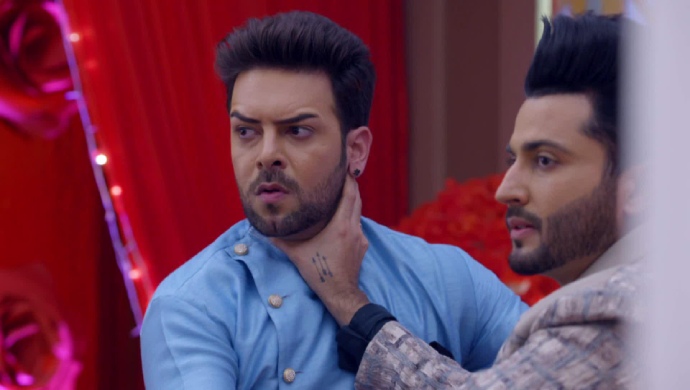 In the previous episode of Kundali Bhagya, Preeta gets a call from Karan. But Sherlyn stops her from answering the call. She threatens to blow up Rakhi aunty with the bomb she planted in the purse if Preeta talks to Karan. Preeta gets angry seeing Sarla and Rakhi in danger. She chokes Sherlyn and tries to take the phone from her hand. However, a masked man shows up to save Sherlyn and kidnap Preeta. Now, Karan is waiting from Preeta at the wedding while is locked in Sherlyn’s house.

In tonight’s episode, Karan is trying to call up Preeta when he sees Prithvi standing near him. Karan tells Prithvi that he is talking to Preeta and doesn’t want any stranger listening in. Prithvi says that he is not a stranger, but her future husband. Prithvi also says that Karan is in love with Preeta but she doesn’t love him back.

Karan admits to Prithvi that he does love Preeta. He also says that he is sure Preeta loves him back too. Prithvi gets angry on hearing this and tries to punch Karan. Karan blocks the punch and chokes Prithvi. When they hear Sherlyn and Kareena approaching, Prithvi stops the fight to avoid any problems in Sherlyn’s marriage.

Kareena aunty tells Karan and Prithvi to get to the mandap since the ceremonies will start. When they pass, Prithvi taunts Karan saying he can’t stop Sherlyn’s marriage and he won’t be able to stop his marriage to Preeta either. Karan promises to stop both the weddings.

Rishabh is happy to see Preeta’s family at the wedding. Preeta’s grandmother tells Rishabh that she will get him married to any girl he likes, even if it is Preeta. Rishabh is stunned but the pandit calls for him to sit in the mandap and Rakhi asks him to do what the pandit says.

Sarla tells Janki aunty that Sammy loves her too. Karan sees Rishabh getting married and gets angry at Preeta not being there at the party. Meanwhile, Preeta is still stuck at Sherlyn’s house thinking of a way to escape from her house. Stay tuned to find out if Preeta manages to escape in time.

Kundali Bhagya 23 May 2019 Preview: Preeta Thinks Of Jumping Out Of A Window