Sarla grabs hold of Sherlyn and begins looking for the man she was marrying, who ran away. 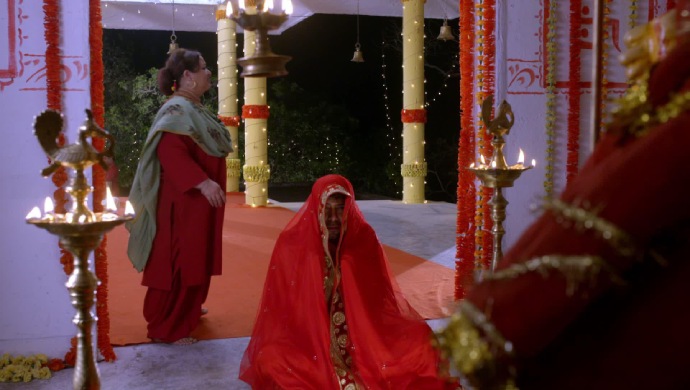 In the previous episode of Kundali Bhagya, Sarla sees Sherlyn getting married behind the temple. She calls up Rishabh hoping that he is marrying her. However, Rishabh answers her call from the bachelor party. She stops the marriage ceremonies in the middle. She demands to see the face of Sherlyn’s husband. Prithvi’s face is covered by a sehra which allows him to hide his face.

In tonight’s episode, Sarla tries to get a look at Prithvi’s face but he manages to run away from her. Sherlyn blocks Sarla’s path and aruges with her. She yells at Sarla for ruining her dream wedding. Sarla threatens to expose Sherlyn to the Luthra family. Sherlyn accuses Sarla saying that she wants Preeta to marry Rishabh. That’s the only reason she cares so much about who he gets married to.

Sarla slaps Sherlyn for saying that she likes the Luthra’s only for their money. Sherlyn tells Sarla that just like no one believed Preeta earlier, no one will believe her story too. Sarla tells Sherlyn that she has seen her marrying someone else with her own eye. She also knows that the Luthra’s will believe the words of an elder person.

While fighting with Sherlyn, Sarla realizes that the groom ran away. She begins to search for the man Sherlyn was about to marry. Prithvi sees her approaching and runs inside the temple. He puts a red dupatta over his head and sits inside the temple pretending to pray. Sarla chases after him but loses sight of him under the red dupatta.

Back at the bachelor party, Mihir asks Karan to introduce him to Preeta. Karan becomes possessive about Preeta when he hears this. He tells Mihir that Preeta is his girlfriend. Preeta who standing at a distance is unaware of this.

Later, Karan sees Preeta putting on make up in a separate room during the party. He goes inside the room to tease Preeta for doing girl stuff. Preeta gets angry when Karan teases her and leaves the room. Karan decides to follow her out.

Sarla meanwhile grabs hold of Sherlyn and takes her out of the temple. Sherlyn bites Sarla’s hand and escapes. Sarla then tell Sherlyn that she will go by herself and expose Sherlyn’s secret to the Luthras. Sherlyn asks Prithvi to do something and save their plan. Will Prithvi be able to stop Sarla from spilling Sherlyn’s secret? Stay tuned to find out.