Karan comes closer to Preeta while celebrating Holi. Meanhwile, Shrishti has a plan to bring them together. 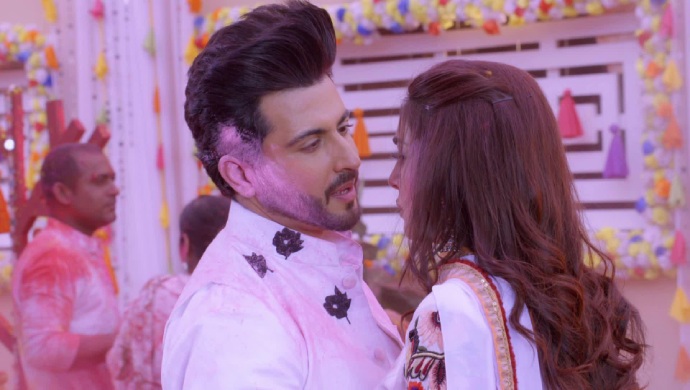 In last week’s episode of Kundali Bhagya, we see Rakhi going to Preeta and her family to celebrate Holi with the Luthra’s. While Karan is suspicously quiet there because of his feelings towards Preeta, Rishabh tries to tell Preeta that he loves her, but fails. Meanwhile, Chachiji and Shrishti are trying to bring Karan and Preeta together.

In tonight’s episode, we see Shrishti planning with Biji to get Karan married to Preeta. While they are discussing their plans, Preeta’s mother interrupts them and Shrishti pretends to have a cough  and diverts the conversation. They decide to get back to work and discuss it later.

On the day of Holi, Rishabh is stopped by Tanvi who tells him to not stress about what Sherlyn said because it is not a big deal and the family was over-reacting. Hearing this, Sameer is impressed with her and begins talking to her. Shrishti who likes Sameer is jealous when she sees this. She hopes Sameer and Tanvi are related but is disappointed to find out that they are not.

Karan bumps into Preeta who tricks him and puts colour on him. Karan then chases Preeta with a bucket of colour to throw it on Preeta. He misses his aim and throws it on Shrishti instead. Preeta taunts Karan about not having any colour left. Karan goes close to her and rubs the colours on his cheeks against hers.

Daadi asks for a glass of bhaang to drink, and while waiting for her glass she sees Sherlyn who she dislikes. She misdirects Sherlyn to keep her away from Rishabh. She doesn’t notice her glass of Bhaang is finished by Rakhi who thinks it’s just Thandai.

Prithvi who is also invited for the party enters with only one aim of playing Holi with Preeta. He looks for her the moment she enters in. Meanwhile, Preeta is with Shrishti who asks her if Karan might have feelings for her. Stay tuned for more updates.