Karan admits his feelings for Preeta, while Chachiji comes back to figure out Sherlyn's secret. 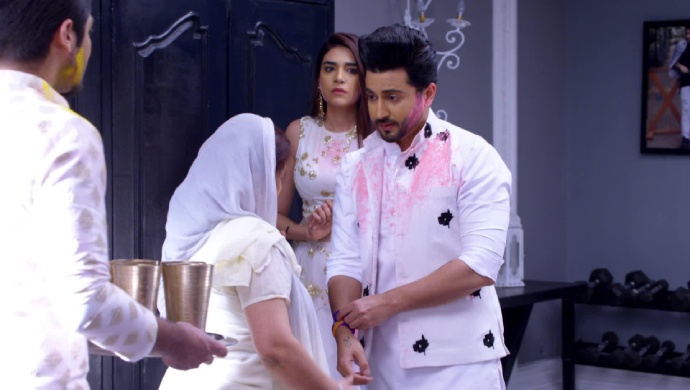 In last night’s episode of Kundali Bhagya, Karan comes closer to Preeta while playing Holi. Meanwhile, Monisha who has escaped from prison is in the Luthra Mansion to kill Preeta and Rishabh. Shrishti and Biji are trying out different plans to make Karan tell Preeta how he feels about her.

In tonight’s episode, Shrishti wonders if Karan has any feelings for her. She asks Preeta if she thinks so too. Preeta gets defensive and says Karan doesn’t feel that way for Shrishti. This way Shrishti’s plan of making Preeta jealous works, but then Preeta talks about her engagement to Rishabh and that she doesn’t mind Rishabh too.

Realizing that she will have to go to Karan herself, Biji and Shrishti come up with a plan to make Karan speak about his feelings to Preeta.

The escaped murderer Monisha has made her way to the Luthra mansion by disguising herself as a Banjara dancer, who are the entertainment act at the party. This way she is able to roam around with a knife in her hands without being suspicious while searching for Preeta and Rishabh.

Sherlyn who is spending time alone at the party is spotted by Chachiji, who already knew that Sherlyn was pregnant from the start. She goes up to her and taunts her about her getting pregnant from some mystery man. Sherlyn tells Chachi that she is getting married to Rishabh. Chachi then confronts Rishabh about having a baby with Sherlyn before getting married. Hearing this Rishabh is left in a shock.

Shrishti makes Biji challenge Karan to a Thandai drinking competition where they lace one of his drinks with alcohol. Later the server mentions all the glasses were not thandai but bhaang. Shrishti makes Karan confess his feelings for Preeta and then convinces him to tell Preeta how much he loves her. What will happen when Karan tells Preeta that he loves her? Stay tuned to find out.

Kundali Bhagya 27 March 2019 Preview: Karan Tells Preeta About His Feelings For Her