In tonight's episode, Karan asks Preeta to welcome Mahira with an aarti while he stands with his arm around Mahira. 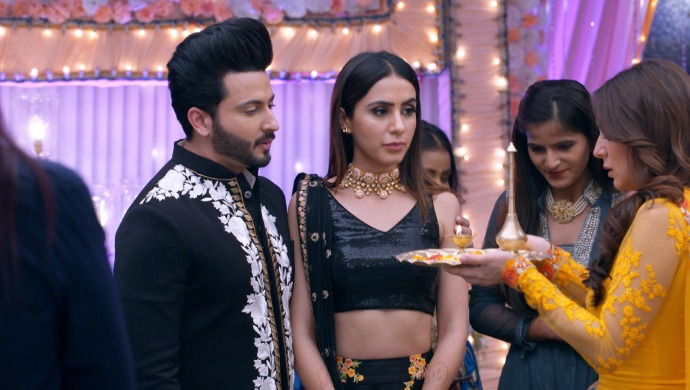 In the previous episode of Kundali Bhagya, Karan goes to Preeta’s house and asks her to personally look after Mahira. Janki and Srishti both feel that Prithvi is better than Karan. Prithvi is at home worried because he has not spoken to either Sherlyn or Preeta for days. Prithvi tries to call up Sherlyn but she gets upset and cuts his call. Ramona notices this and realises Sherlyn is cheating on Rishabh with someone else. She gives Sherlyn tips on how to hide her extra-marital affair. Sherlyn and Ramona then convince Kareena to put a case on the Arora family. Karan stops their plan saying he wants revenge on Preeta himself. He later tells Preeta to go out and welcome Mahira at the gate.

In the next episode, Srishti avoids bumping into Sherlyn, which makes Sherlyn taunt her. Srishti says she was not avoiding Sherlyn, but avoid bumping into her baby with the big box in her hand. Srishti says that the heavy box would hit Sherlyn’s stomach and affect the baby. She adds t says finally Sherlyn’s baby bump is seen. She says the day Sherlyn has the baby, everyone will know that Preeta was right.

Pritbvi decides to call Preeta and check on her. However, Janki answers the call saying Preeta is busy and asks him to call the next day. Prithvi gets offended and decides to visit Preeta immediately. Karan tells Preeta he is more focused on finishing his Mehndi Ceremony than taking Preeta to court. Preeta bumps into Rishabh at the hall. He thanks her for giving them the hall so easily.

Preeta realises that Karan has lied to Rishabh. She goes along with Karan’s lie and says she is happy to help them. Rishabh asks Preeta if she sent the legal notice to Karan but Preeta says she doesn’t know about it. Mahira enters the wedding hall and Karan decides to call Preeta to welcome Mahira.

Kritika overhears Sherlyn cursing the Arora’s for not leaving her alone. Kritika and Sammy both feel Sherlyn is bad influence on Mahira too. Preeta does the aarti but then goes into another room and cries. Karan enters the room to find out what Preeta’s actual reaction is and finds her crying. Will Preeta end up admitting her feelings to Preeta? Stay tuned to find out.

Ghar Grihasti Aur Glamour Awards: The Award For ‘Top Secret Wedding Of The…

Tridha Choudhury From 'The Chargesheet: Innocent Or Guilty' Gives Her Take On Infidelity