Karan finally musters the courage to tell Preeta about his love for her. 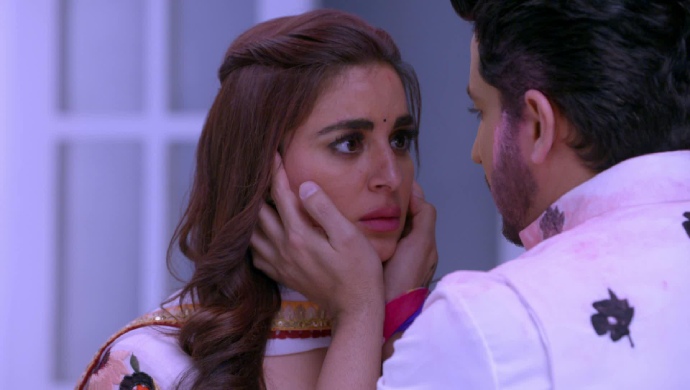 In last night’s episode of Kundali Bhagya, Karan ends up confessing to Shrishti about his feelings for Preeta after drinking multiple glasses of Bhaang mixed with alcohol. Shrishti convinces him to tell the same thing to Preeta as well. Meanwhile, Sherlyn wants to put colour on Prithvi while he is only looking for Preeta to put colour on him.

In tonight’s episode, Sherlyn catches up with Prithvi when no one is looking and convinces him to put colour on her with his own hands. He is scared of them getting caught but Sherlyn is convinced that nothing can stop her wedding to Rishabh and puts colour on him anyway. Chachi ji sees this from a distance and figures out Sherlyn’s plan.

Rakhi who drank a glass of bhaang meant for Daadi, is now showing her fun side and displaying affection toward her husband. Biji who also drank a few glasses of bhaang is going around laughing and making jokes. She joing Rakhi in having fun as well.

Preeta is sent to meet Karan by Shrishti and Sammy. Preeta sees Karan drunk, and begins pulling his leg. Karan then tells her that he has something to say to her. He holds Preeta close but can’t seem to tell her that he loves her. So he asks her to turn away so he gets the courage to tell her. Just then the bhaang and alcohol kick in and he passes out on his bed.

A drunk Rakhi asks her husband to get married to her. When he says no because they are already married, she gets hysterical making her own story of him cheating on her and draws the attention of the rest of the family. In a good-humored nature the entire family begins making fun of her husband.

Meanwhile, Prithvi is still looking for Preeta, finds her alone lost in her thoughts about what happened with Karan. He insists that she rub his cheeks with colour despite Preeta seeming hesitant. To avoid any nuisance she puts colour on him anyway.

Will Karan come back to his senses and tell Preeta about his feelings? Will Preeta understand Karan’s love for her? Stay tuned to find out.

Kundali Bhagya 28 March 2019 Preview: Rishabh's Life Is In Danger, Sherlyn's Secret Is Out