In tonight's episode, Preeta tries to steal the purse from Rakhi's hands as well as save her own mother. 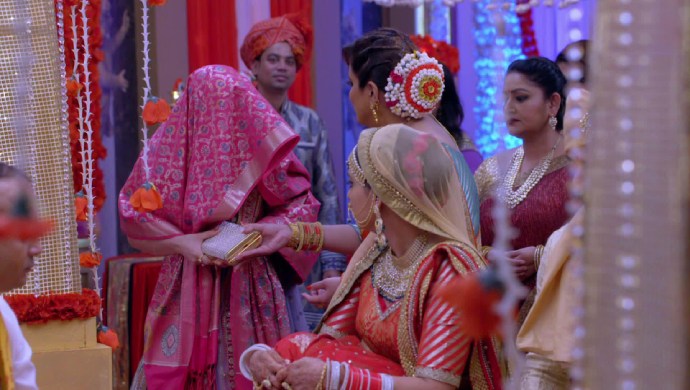 In the previous episode of Kundali Bhagya, Rishabh tells Sherlyn the truth. He admits that he wanted to marry someone else but agreed to marry her by mistake. Sherlyn understands that Rishabh is in love with Preeta. She offers to forgive Rishabh and says that she still wants to marry him. Prithvi is happy that Sherlyn is playing it smart, but he realizes that he can’t control her anymore. Preeta finds Rakhi aunty and follows her to the mandap.

In tonight’s episode, Preeta finds Rakhi near the mandap which has been re-built again. Preeta tries to approach Rakhi but one the kidnappers stops her from coming close to the mandap. She makes up and excuse and goes the other way before she is recognised.

Sherlyn is eagerly waiting for the wedding to start. She gets nervous that Preeta might escape and she will have to kill somebody. She is ready to delete all her messages which will prove she is a criminal. Preeta hides when Sherlyn’s mother enters the room and takes Sherlyn to the mandap.

Preeta finds Sherlyn left her phone behind and considers taking the phone with her. Preeta finds Karan talking about her. He says that Preeta must be scared and backed off from the wedding. Sherlyn comes in and takes Karan to the mandap to start the wedding proceedings.

When Sherlyn and Rishabh are at the mandap, Rakhi bends to help Sherlyn. While she is bending the purse slowly slips from her hand. Sherlyn and Prithvi are scared the bomb will blast. Preeta steps in just in time and purse from falling. She tries to take the purse away with her but Rakhi asks for her purse to be returned.

Later when they are at the mandap, the pandit stops the wedding. He tells Rakhi that the Kundali’s she gave for Sherlyn and Rishabh don’t match. Rakhi says that she forgot the correct ones in her room. She goes there to get it back. Will Karan and Preeta be able to stop the marriage within that time? Stay tuned to find out.