In tonight's episode, Rishabh tries to call the police to arrest the robbers but they catch him and hold him hostage. 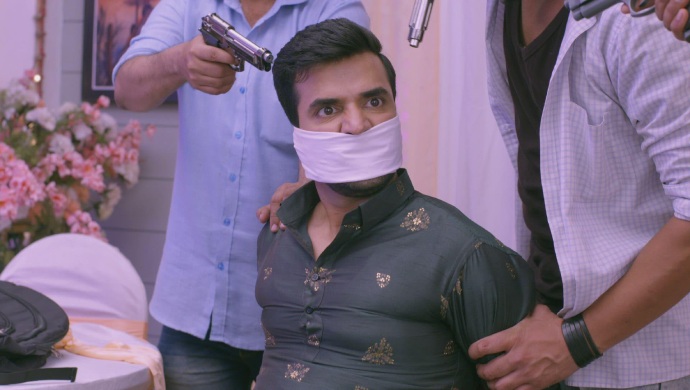 In the previous episode of Kundali Bhagya, Prithvi finds Rishabh but manages to avoid seeing Sherlyn. Mahira puts mehndi on her hands and everyone says the darker her mehndi colour is her husband will love her more. Kareena tells Srishti to take Mahira in the room and remove the mehndi. Sherlyn goes with Mahira but leaves when Srishti decides to bring up her pregnancy. Karan and Preeta both try to say they love each other. In the end, Preeta agrees to be with Karan till all his wedding ceremonies are completed. She holds his hand and takes him back inside the hall. Prithvi looks for Preeta but Ramona takes him to Sherlyn.

In tonight’s episode, Prithvi tries his best to avoid Sherlyn. Ramona decides to call Sherlyn to meet Prithvi. Prithvi runs away pretending like he saw someone else. Sherlyn is about to reach him when masked men break into the room with guns. They fire a blank shot and demand everyone to stay where they are. Rishabh tries to control the situation.

Daadi and Mahira scold Srishti for behaving rudely with her. Srishti asks them to check the oil before she removes the mehndi so that no one can blame her. When the mehndi turns out to be light coloured, Srishti repeats what Kareena said that the darker the mehndi colour is, the husband will love her more. Prithvi hides under a table and Sherlyn hides under the table right next to him.

Karan and Preeta are just about to enter the hall when they hear gunshots. Karan decides to use the other entrance through the kitchen and asks Preeta to stand outside. Kritika tries to pass her phone to Rishabh before the robbers take it from her. It goes under the table to Sherlyn. She slides the phone back out and it goes to Rishabh.

When Rishabh tries to make a call, the robbers catch him as well as Sherlyn. Rishabh tries to beg the robbers to leave them alone and offers to pay them any amount they way. Prithvi escapes while Rishabh keeps the robbers busy. He tries to find the groom’s room and hide there. The robbers tie up Rishabh and cover his mouth. Will Karan be able to stop the robbers? Stay tuned to find out.

Happy Birthday Gul Panag: Thank You For Being YOU, Living By ‘You Do…

Ridhi Dogra: Masaba Gupta Understands The Cut Of A Woman With Big Hips