In the next episode, Karan is carrying the mehndi tray and slips. Preeta stops the tray from falling but gets mehndi on her hands. 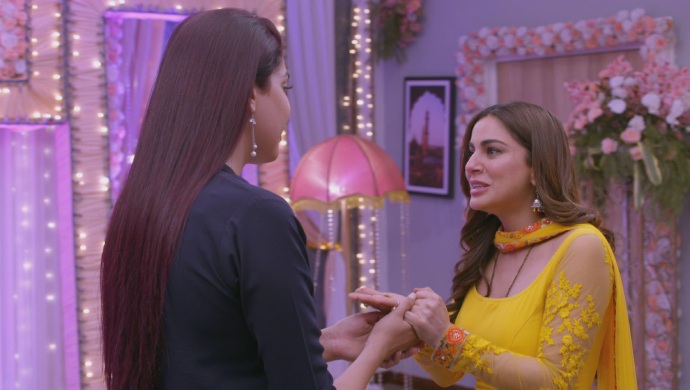 In tonight’s episode of Kundali Bhagya, Karan tries to make Preeta admit that she loves him and is jealous of Mahira. Preeta says Karan should not be so affected by what she thinks of him. Preeta is interrupted by Janki who says there is a problem in the hall. Sherlyn, Mahira and Kareena are complaining about the hall being too hot. They have planned this by putting hot water in the coolers to the air hot. However, Preeta deals with the situation and calms down everyone. Karan helps her by calling for iceboxes without revealing his name and then goes to get the pandit. Kareena warns Preeta to stay away from Karan.

In the next episode, Karan is taking the thali with mehndi in it. He tries to avoid bumping into kids running towards him. Karan loses balance as the tray tilts in his hands. Preeta is standing nearby and stops the tray from falling. However, mehndi falls on Karan and Preeta’s hands. Preeta smiles and cries while telling Srishti that Karan and she are meant to be together. Preeta decides to tell Mahira to back out of the wedding. Will Preeta succeed in her plan? Stay tuned to find out.

Kumkum Bhagya’s Abhi Or Karan Of Kundali Bhagya: Who Do You Think Needs…

Rituraj Singh Talks About ‘Never Kiss Your Best Friend’ and His…