In tonight's episode, Karan tells Preeta that he will get her out of jail. He also mentions that he cares about her from the bottom of his heart. 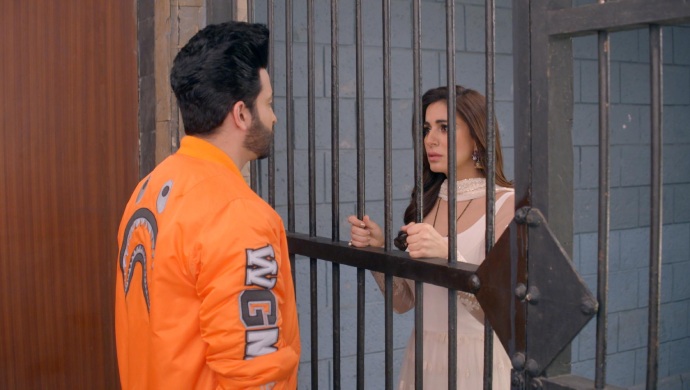 In the previous episode of Kundali Bhagya, Karan reaches home and begins looking for Sherlyn. Mahira tries to warn Sherlyn about Karan. However, Rishabh finds Sherlyn and asks her why she looks nervous. Karan also sees Sherlyn and is about to confront her, but Mahira spills chutney on Sherlyn’s clothes and takes her away. Karan tells Rishabh about Sherlyn is behind Preeta’s condition and adds that Sherlyn is manipulating Mahira. Rishabh demands to see the evidence that Sherlyn gave the police but she threatens to leave the Luthra House. Rishabh allows her to leave but only after she shows him the video.

In tonight’s episode, Rishabh tells Sherlyn that he doesn’t need to see the video to prove that Preeta is innocent. Rishabh tells Karan that Sherlyn is leaving the house for a petty issue. Karan tells Rishabh that he is going to meet Preeta in jail. Rishabh wants to go along with him but Karan asks him to stay at home because Sherlyn will create some drama before leaving.

Sherlyn goes to Daadi’s room where Rakhi and Kareena are waiting for her. Sherlyn tries to return all the jewellery they had gifted her as the bahu. Rakhi demands to know why Sherlyn is crying. She tells them that Rishabh asked her to leave the house. She even adds that Karan doesn’t want her in the house. She says that Rishabh trusts Preeta more than he trusts her.

Preeta is in jail when she sees Karan entering the police station. He walks up to her jail cell and asks her if she is fine. He tells Preeta that he is going to get her out of jail with a clean chit. Preeta asks Karan why he cares about her. Karan tells her that he couldn’t stop thinking about her while he was at the party.

Rakhi tries to convince Sherlyn that Rishabh knows that Preeta will never try to kill Mahira. Sherlyn says she already gave the police proof that Preeta is innocent and still Rakhi doesn’t believe her. Rakhi decides to talk to Rishabh and sort things out but Sherlyn leaves the room with her bags. Everyone blames Rakhi for not supporting Sherlyn. Will Rakhi ruin Karan’s plan to save Preeta? Find out tomorrow.