In tonight's episode, Karan keeps Preeta in a room with him to save her from the terrorists, but Preeta leaves and gets caught. 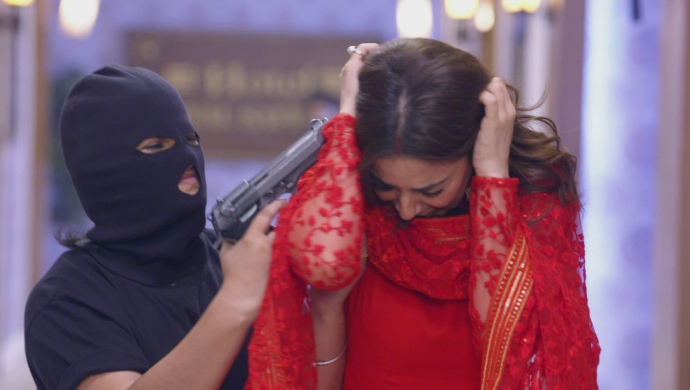 In the previous episode of Kundali Bhagya, Preeta has her job interview at the hotel where her boss’s interview. Her Boss, Renuka’s son, finds Karan and brings him along for a selfie. Karan gets upset seeing Preeta and goes outside. He meets Prithvi there who tells Karan that Preeta is in the hotel. Prithvi goes and proposes to Preeta asking her to become friends again. Preeta refuses Prithvi’s request. Preeta goes to continue her interview in a hotel room which is right next to Karan’s room.

In tonight’s episode, Preeta hears gunshots outside and goes to check what happened. Karan also comes out of his room and find himself face-to-face with Preeta. They both look at each other for a while before someone from the hotels staff runs in front of their eyes. Karan follows the hotel staff and watches from upstairs.

Preeta refuses to be in the same room as Karan. She demands to leave but he stops her. Preeta says she knows that she needs to run away from terrorists but she doesn’t know what to do with Karan. Before Preeta can leave, Karan hears the terrorist coming towards them and takes Preeta to hide behind a shelf but drops his phone.

The terrorists break into the Prince Harshvardhan’s room to rob his special locker. One of the terrorists also checks the room Karan and Preeta are hiding in. He only finds Karan’s phone on the floor but cannot see Karan and Preeta. When he leaves Preeta also decides to go. When she opens the door she sees a terrorist killing two people.

She runs back in fear and hugs Karan. He hugs her back too and they both realise they have feelings for each other. Preeta leaves the room and gets caught by a terrorist. Karan decides to save her by telling the terrorist and making himself a target instead of Preeta. Will Karan survive? Watch tomorrow’s mahaepisode to find out.

Jamai 2.0 Teaser: Nia Sharma And Ravi Dubey’s Reunion Is Everything We…

Jamai 2.0 FIRST Poster Out: Ravi Dubey And Nia Sharma Return As #SidNi In A…

Watch the latest episodes of Kundali Bhagya, now streaming on ZEE5. Watch the mahaepisode from 6 pm tomorrow on ZEETV and streaming live on ZEE5. .

Watch 'The Final Call' the gripping story of a plane highjacking starring Arjun Rampal and Sakshi Tanwar, on ZEE5

Kundali Bhagya 5 October 2019 Preview: Karan And Preeta Still Care About Each Other?