Sherlyn has a strategy to fast-track her wedding with Rishabh, but it fails. What went wrong? Find out! 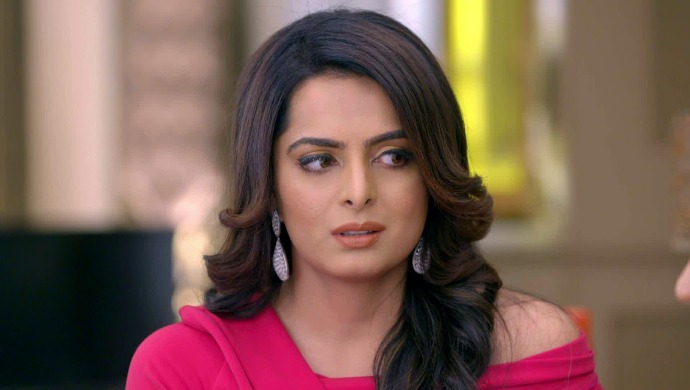 In the last episode of Kundali Bhagya, we saw Sherlyn telling Prithvi that it was she who saved him. She tells him about how she struck a deal with Billa and offered him money, to take Monisha’s name instead of Prithvi’s. Sherlyn assures Prithvi that she did all this for their baby. Meanwhile, Rishabh is adamant that neither Monisha or Rithvik could have been the masterminds. Kareena interrupts and tells everyone to rejoice instead of wondering who the mastermind is. She also says that the Luthra house demands some real celebrations and suggests a marriage between Rishabh and Sherlyn.

Kareeena steps out to look for Sherlyn to tell her the good news but is unable to find her. She crosses her room and spots her with Prithvi. A shocked Sherlyn walks inside her room to look for the two, but they remain hidden. Kareena speaks out loud and says that Sherlyn couldn’t have been with Prithvi as she’s much classier than him. She further adds that someone like Prithvi is suitable for a “third-class” Preeta. She leaves and Prithvi quickly locks the door.

Sherlyn is about to tell him something when she feels sick and pukes. She says her health has deteriorated and asks Prithvi to take her to a doctor. Preeta on the other hand says that they need to stop Rishabh from getting married to Sherlyn as she isn’t right for him.

The doctor advises Sherlyn to take rest as there are some complications in her pregnancy. Sherlyn recalls all the sins that she has committed and starts feeling incredibly guilty. Preeta says that they have to expose the truth about her pregnancy. The episode ends with Karan asking Rishabh to postpone his marriage with Sherlyn.

In tonight’s episode, we saw Sherlyn admitting that there has been tremendous stress in her life. Prithvi asks Sherlyn to calm down and instead she flares up. They both start arguing and the doctor tells them to stop bickering as it will affect the health of the baby. Prithvi gets arrogant with the doctor and is asked to get out. She advises Sherlyn to stop wearing body-hugging clothes as it will affect the baby. Later, Sherlyn and Prithvi have a talk and he tells her to get married to Rishabh, as she can’t keep her pregnancy a secret for long.

Meanwhile, Karan, Preeta and Rishabh voice their displeasure over his marriage with Sherlyn, and he agrees to postpone the wedding. The next morning, Rakhi starts preparations for Maha Shivratri and Kareena informs her that Sherlyn and her mother are coming home with the panditji.

Kareena asks Rishabh to cancel all his meetings and says that he can be back home, but just for an hour. Sherlyn and her mother walk in and greet everyone. Kareena’s mother Sanjana says that there’s a problem in this marriage as there’s trouble with Rishabh’s kundali. The pandit reaffirms the same and says that there’s a ‘mahadosh‘ in the kundali. He further adds that because Rishabh didn’t get married before the age of 22, he brings in bad luck for the family. Sherlyn says that bad things have been happening one after the other and if the marriage is delayed, things would get worse.

The pandit says that the wedding should happen within 14 days. Rishabh walks in and Kareena informs him about the development. He refuses to marry Sherlyn. He says 14 days is too less a time span and if they are okay with a time 6 months later, he will be ready. The episode ends with Sanjana requesting Rakhi to make Rishabh understand the gravity of the situation and the latter replying that her son will marry her daughter, but only after six months.

What will Sherlyn do now? Will she convince Rishabh to go ahead with the marriage? Stay tuned for more updates!

Don't Miss Parchayee, A Thrilling ZEE5 Original Series That Will Spook You Out Like Never Before!

Yaaron Ki Baarat: A Celebrity Talk Show You Shouldn’t Miss If You Like Filmi Gossip