In tonight's episode, Preeta finds Karan safe after he puts himself in danger to save her. Preeta decides to help him fight the terrorists. 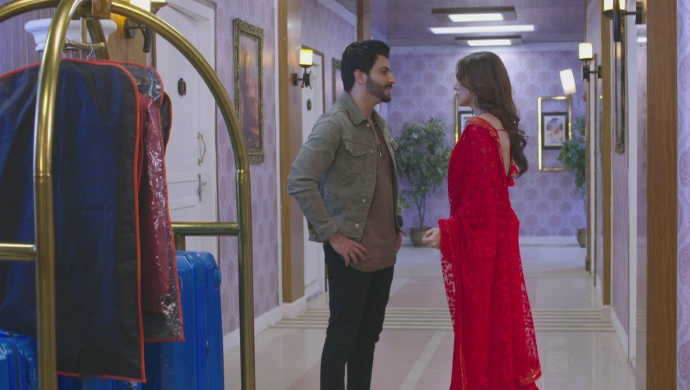 In the previous episode of Kundali Bhagya, Preeta and Karan hear gunshots and leave their rooms. When they come face-to-face, Karan hears the terrorists coming and hides with Preeta in a separate room. When Preeta tries to leave Karan she sees a terrorist killing someone she runs back and hugs Karan. In this Karan loses his phone and it gets picked up by a terrorist. When Preeta eventually leaves Karan she is caught by a terrorist. Karan sees this and puts his own life in danger to save Preeta.

In tonight’s episode, The terrorist shows Karan’s phone to everyone and asks who’s it is. When no one claims the phone he realises it belongs to someone else who they haven’t caught. Renuka’s son asks her where Karan Luthra is. The terrorists find the locker they were planning to rob from the Prince Harshvardhan.

Preeta runs after Karan and finds him hiding after the terrorist is gone. They find out that they are both worried about each other’s safety. He tells Preeta to hide in a room while he tries to save everyone else. Preeta decides to help him instead. They both try and find a phone to call the police and agree to meet each other in 10 minutes.

Prithvi is still happy knowing that Preeta wants to marry him. He gets a call from Sherlyn apologising since she cannot meet him. By using Sherlyn’s emotions, Prithvi convinces her to meet him by making her feel he loves her again. Prithvi goes to Sarla’s house before meeting Sherlyn and apologises to her.

Kareena calls Rishabh and reminds him that he promised to take her shopping. She convinces Rishabh to meet her in the same mall where Sherlyn was going to meet Prithvi. Shelryn doesn’t know which mall they are going to. She overhears Sammy and Srishti talking about how Prithvi is trying to find a way to get married to Preeta again.

When Sherlyn goes to the mall she scolds Prithvi for wanting to marry Preeta again. When Prithvi is scolding Sherlyn Kareena and Rishabh pass by the other side. of the aisle. Kareena feels she heard Sherlyn. When Sherlyn hears Kareena’s voice she runs away with Prithvi.

Prtithvi warns Sherlyn to be nice to him or he will leave her for someone else. Mahira tries to get Kritika to wear a short dress. Akshay forces Kritika to say she likes salwars and not the short dresses. Mahira realises Akshay is too dominating with Kritika. Watch what happens when Kareena finds Sherlyn at the mall in the next episode.