In tonight's episode, Preeta takes Srishti through a secret passage to help Rakhi escape after she is locked alone in a room. 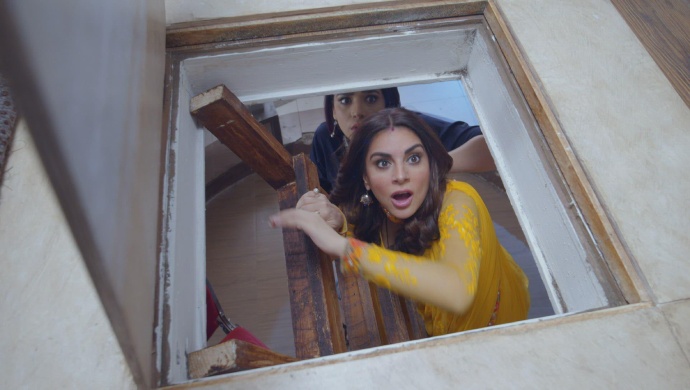 In the previous episode of Kundali Bhagya, Preeta and Srishti plan to trick the fake robber and ask him to make the other robbers leave. Preeta lures the fake robber into a room where Srishti will be waiting for him. Seeing Preeta calling him, Prithvi rushes after her. The real boss of the robbers shows up and takes Rakhi’s mangalsutra. Karan and Rishabh try to beat up the robbers, but stop when one of them takes Rakhi hostage. Janki tries to save the Luthras by throwing chilli powder on the robber’s eyes. Rakhi refuses to leave without her mangalsutra and the Luthras fail to escape. Prithvi escapes from Preeta and Srishti, by hiding in the washroom.

In tonight’s episode, The robbers decide to focus on finding the person who was pretending to be the fake boss. They decide to take Rakhi along with them so that no one tries to escape. They lock Rakhi in another room and keep her. Preeta sees the room and realises that there is a secret way to reach Rakhi and rescue her.

Preeta goes under Rakhi’s room and opens a door hidden under the floor carpet. Srishti and Rishabh argue with each other to distract the robbers and let Karan escape. He tries to search for Rakhi too. Rakhi is shocked to see Preeta and Srishti, but she agrees to escape with both of them. Karan makes a noise outside the room by mistake. The robbers not only find Karan but also catch Rakhi along with Preeta and Srishti.

The robbers bring Karan to Rakhi’s room and find her trying to escape. Preeta and Srishti also get caught with Rakhi and Karan. Srishti tells the kidnappers where they can find the fake robber. When the robber reaches the washroom where Prithvi is hiding, he takes Prithvi at gunpoint and makes him a hostage. Preeta tries to stop the robbers from taking Karan and Rakhi away. The robbers realise that Preeta and Karan love each other.

Sarla finds out that there are robbers in Kumkum Bhagya hall. Preeta manages to get all the robbers together and electrocutes them by surrounding them with water and throwing a live wire in the water. The robber who makes Prithvi hostage gets saved from the shock but Sarla pushes him in the water too. The police arrest the robbers but will this make Karan trust Preeta again? Find out tomorrow.