In Sunday's Holi special episode, Preeta reveals that she knows Mahira tried to kill her twice. Mahira spikes Karan's bhaang to pretend to seduce him. 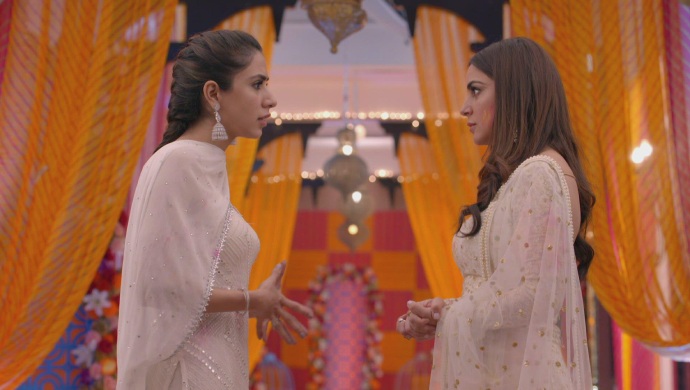 In the previous episode of Kundali Bhagya, Karan says he will not marry Mahira till his father Mahesh comes out of his coma. Mahira tells Sherlyn that Karan doesn’t want to marry her. Sherlyn gives Mahira bhaang and asks her to drug Karan and get him to the bedroom. She says that Karan will be forced to marry her when his family sees them in the same room. Sammy overhears this and asks Preeta and Srishti for help. Preeta and Srishti reach the Luthra House saying they want to spend Holi with Rakhi. Karan misses Preeta at the Holi party and is happy to see her there. Prithvi calls up Sherlyn and tells her that he will be the first person to put colour on her face.

Karan tells Preeta to go play Holi with his mother. Sherlyn finds Prithvi in the crowd when no one else can recognise him. Sherlyn goes to Prithvi and puts colour on his face. Karan goes to his mother where Mahira and Preeta are both standing. Karan wishes Mahira Happy Holi, but when she expects him to put colour on her face, Karan puts colour on Preeta instead.

Sherlyn wants to know what Preeta is doing in the Luthra House. Mahira tells her that she left Preeta in the burning room and she feels Preeta is here for revenge. Sherlyn tells Mahira that she has tried to hurt Preeta and get her out of the Luthra House in different ways including sending a legal notice in Preeta’s name. She convinces Mahira to give Karan a glass of bhaang and bring him into the bedroom.

After listening to Sherlyn, Mahira leaves the room. She bumps into Preeta outside and asks her what she is doing in the Luthra house. Preeta tells Mahira that she knows the whole truth now. She knows Mahira tried to push her in front of the truck too. Preeta says Karan married her when she didn’t even know she was marrying him because he was the one meant to be in her Kundali.

In the upcoming episode, Preeta tells Mahira that she won’t let her marry Karan. Later, Preeta tries to stop Karan from drinking the glass of bhaang. However, she cannot tell him that Mahira has spiked his drink and plans to use him to trick his family. Karan doesn’t listen to Preeta and drinks the bhaang.

Holi 2019 Playlist: Switch On The Festive Vibe With 5 Peppy, Bollywood…

Watch all the performances and behind the scene clips from the Rang Malang Holi special, only on ZEE5.

Mentalhood’s Karisma Kapoor Has Holi Plans With The Whole Kapoor Khandaan! Check It Out!