Some fishermen find Sarla's body and blame Prithvi and Sherlyn for trying to kill her. 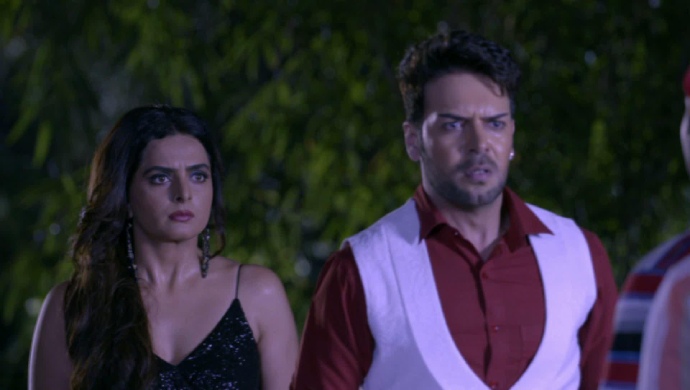 In the previous episode of Kundali Bhagya, Sarla manages to beat up Sherlyn and chases Prithvi. She chases Prithvi to remove the mask from his face. Sherlyn runs after Sarla and pushes her away from Prithvi/ Sarla falls off the bridge into a deep lake below where she drowns. Meanwhile, Preeta goes looking for her mother but can’t find her at the party.

In tonight’s episode, Prithvi and Sarla go back to their car to celebrate Sarla’s death. Just then they hear some fishermen screaming after finding a dead body in the lake. Sherlyn and Prithvi rush to the spot. There they realize that the fishermen have discovered Sarla’s body.

They get out of the car to take Sarla’s body away since the fishermen consider taking her to the hospital. When the fishermen see Sherlyn and Prithvi they start accusing them of trying to kill Sarla. One of them even says that they saw Sherlyn push Sarla down the bridge and into the lake.

Karan and Tanya think of a way to make Sammy and Srishti express their feelings towards each other. Tanya spills ketchup on Sammy by mistake she takes off his shirt to help him clean the stains. Karan tells Srishti that he seen Tanya and Sammy together in the bedroom. Srishti panics and rushes to Sammy’s bedroom.

Prithvi manages to convince the fishermen that Sarla is his mother and he would never try to kill her. He even asks the fishermen to put Sarla in the backseat of his car so he can take her to the hospital. When they are in the car Prithvi tells Sherlyn that they can’t kill Sarla now otherwise the fishermen will put them in jail. Stay tuned to find out what Sherlyn and Prithvi do to Sarla.

Kumkum Bhagya 9 May 2019 Preview: Rhea Hugs Pragya At The Party