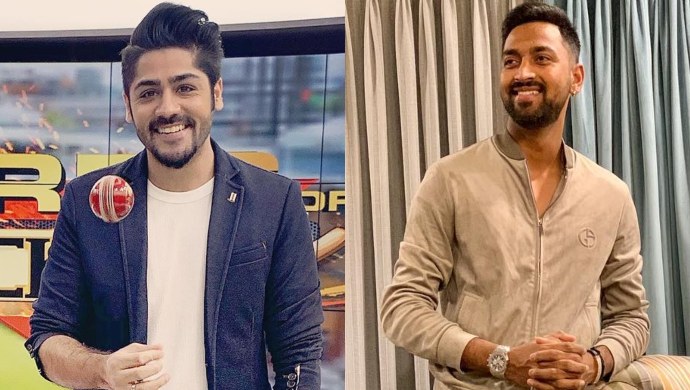 Abhishek Kapur is known for playing Sameer Luthra on Ekta Kapoor’s hit television series Kundali Bhagya. Just like Dance India Dance 7: Battle of the Champions host Karan Wahi, Abhishek too was a cricketer before he became an actor. Cricket can rightly be said to be his first love, for he never misses a chance to catch match updates. Just yesterday, on Tuesday, Abhishek was stationed at his home to watch India vs New Zealand ICC Cricket World Cup 2019 semi-finals. He even shared pictures with his friends on Instagram, but it was a certain photograph that caught our attention. Abhishek shared a picture of white cricket gloves and thanked cricketer Krunal Pandya in his Instagram story.

Don’t believe us? Here, sample this picture of Abhishek thanking the star sportsman for the special gift.

The gloves do look pretty cool we must say! The camouflage trend has taken over the world of sports accessories and guards too it seems.

In case you missed catching Abhishek’s Instagram stories, here are pictures he shared of himself watching the World Cup semi-final match with his buddies.

For those unaware, Abhishek Kapur is friends with Indian skipper Virat Kohli. The Delhi boys played cricket together for 14 years. Abhishek, in fact, refers Virat by his nickname ‘Cheeku.’ He often shares throwback photos with Virat from their growing days on Twitter and Instagram. Abhishek had sent in his best wishes for Virat when he tied the knot with Bollywood actress Anushka Sharma in 2017.

From our younger days to now not only have u matured as a cricketer but as a human being as well we have not spent much time together in the last few years but yes seeing u on field n ure interviews makes me realise d gud change in u wish u al d best cheeku much ❤️ @imVkohli pic.twitter.com/pijLf5kpsi

Abhishek’s performance as Sameer Luthra and his cute banter with Anzoom Fakih aka Srishti Arora on Kundali make up for bundle of entertainment. Sameer and Srishti are always upto some mischief or solving mysteries together. Off late, the duo has been trying to bring Shraddha Arya’s Preeta Arora and Dheeraj Dhoopar’s Karan Luthra back together. It remains to be seen if PreeRan patch up or not.

Coming back to Krunal’s gift for Abhishek, what do you think about the gesture? Share your views in the comments box below.

4 Scenes In Phobia Where Radhika Apte Outdid Herself

Varun Mitra: Thanks To People Like Sunil Chhetri, Football Is Getting Eyeballs Now