Kundali Bhagya: Karan Returns To The Mandap And Marries Preeta? Exclusive Pics Inside

These latest stills from the sets of Zee TV serial Kundali Bhagya show a goofy side of actors Shraddha Arya and Dheeraj Dhoopar who play Karan-Preeta. 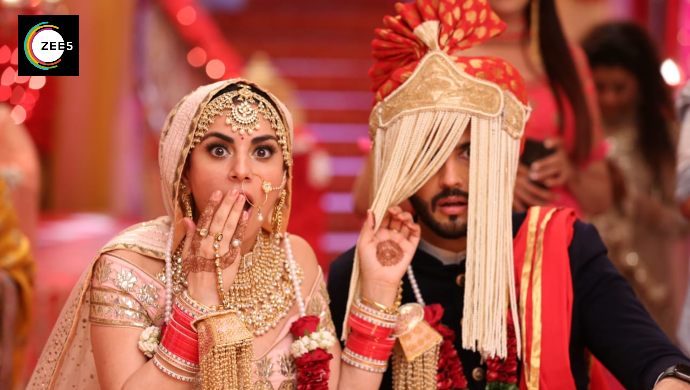 Will they, won’t they? This has been the question running across the minds of Kundali Bhagya and PreeRan fans ever since the wedding sequence started airing. Dheeraj Dhoopar and Shraddha Arya, who play Karan Luthra and Preeta Arora respectively have been entertaining viewers with a high-voltage drama on the daily soap. It’s been a couple of weeks since Preeta sat in the wedding mandap, set to marry Prithvi Malhotra. However, Karan and Sherlyn kept making attempts to stop Preeta and Prithvi’s wedding. In the latest episodes, Mahesh reveals to Rishabh that it was Prithvi who caused his accident. This leads to a major showdown as Rishabh gets Prithvi arrested while Preeta tries to defend him.

Meanwhile, Karan and Sameer are on the lose. Prithvi’s men are keeping an eye on both of them and have been told to not be allowed to enter the wedding hall. Karan had earlier kidnapped Prithvi and entered the mandap in his place to marry Preeta. Things take a drastic turn when Prithvi gains consciousness and hits back. As of yet, Prithvi and Rishabh are in the police station. A furious Sherlyn refuses to help Prithvi after he decided to marry Preeta despite she asking him not to. But looks like Karan might finally manage to marry Preeta! Yes, you read that right. The latest set of pictures we received from the sets fo Kundali Bhagya show Preeta and Karan in the mandap. Not just that, Preeta also knows that she is marrying Karan. Don’t believe us? See for yourself:

Now that we know Karan is back in the mandap, will Preeta agree to tie the knot with him? We know she has earlier confessed to her feelings for him. Will Preeta and Karan finally unite or is this just the goofy side of Dheeraj and Shraddha? Your guess is as good as ours!

Dilli Darlings 30 August 2019 Written Update: Deepshika And Her Husband Deal With A Creep?