After failed attempts, Sherlyn finally succeeds in drugging and tricking Rishabh. What will she do next? 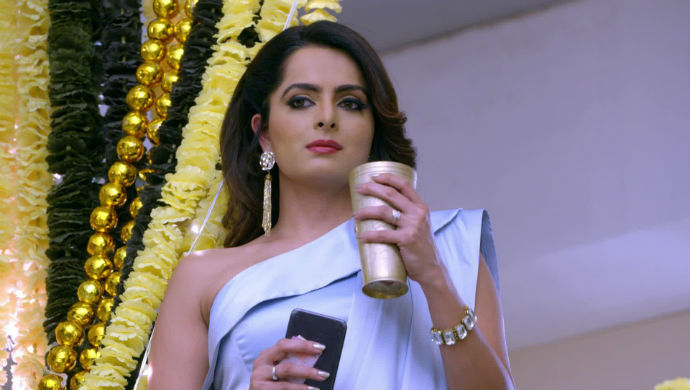 In the last episode of Kundali Bhagya, we saw Sanjana scolding Prithvi for having troubled Sherlyn, but the latter stepping in and stopping her. Sanjana eventually apologizes to Prithvi, much to his relief. Meanwhile, Preeta notices Tanvi’s closeness with Karan, and pulls him away. She confronts him and Karan taunts her for being jealous. Later, Tanvi talks to Rishabh and asks him why he isn’t marrying Preeta instead of Sherlyn, considering she’s more his type. Judging by his reaction, Tanvi figures out that Rishabh loves Preeta.

Srishti notices Tanvi talking to Rishabh and gets furious. Sameer notices her reaction and thinks Srishti is getting jealous of Tanvi’s closeness to Rishabh. He gets confused as to whether Srishti likes him or Rishabh. A while later, Rishabh picks out clothes for his meeting the next morning and is helped by Tanvi. Preeta notices this and gets angry. She interrupts their meeting and picks out clothes for Rishabh instead. But she storms out when Rishabh praises Tanvi, leaving him confused.

Rishabh discusses the incident with Karan without naming Preeta. Karan convinces Rishabh that the woman is jealous of Tanvi as she loves him. He asks for the name and Rishabh says Preeta, but meets with a shocked reaction. He covers up by taking Sherlyn’s name. The episode ends with Sherlyn walking in on their conversation, while Prithvi enters the hall with a glass of bhaang.

In tonight’s episode, we saw Preeta informing Karan that her gynecologist friend is on her way. Karan tells her that Sherlyn loves Rishabh and got furious seeing his closeness with Tanvi. Meanwhile, Sherlyn spots Rishabh talking to Dadi and offers him a glass of thandai which has bhaang mixed in it. Her plan fails when Rishabh denies the drink and Dadi takes it instead. Sherlyn panics thinking that if Dadi gets high, she will be suspected and decides to offer her another drink. Dadi accepts it.

Later, Srishti confronts Sameer over his closeness with Tanvi but he assures her, that there’s nothing going on. He confesses to Srishti that she’s special to him and their intimate moment is caught by Sarla. She tells Srishti that Sameer is a nice man, but won’t go against his family, especially Kareena. She points out that Kareena dislikes Srishti and she should remember that. Srishti is confused by Sarla’s talks.

Sherlyn makes another glass of bhaang ready and bribes a helper to offer it to Rishabh. Preeta’s gynecologist friend Priya walks in and Preeta goes to welcome her. The helper offers Rishabh the glass of thandai and he drinks it, much to Sherlyn and Prithvi’s relief. She gets ready to trap Rishabh.

Karan and Preeta welcome Priya and go over the plan to trick Sherlyn. Rishabh starts feeling giddy and Sherlyn takes advantage of the situation, claiming that Preeta is calling him to her room. The episode ends with Rishabh confessing his feelings for Preeta to Sherlyn, in an intoxicated state!

What will happen next? Will Preeta come to know of Rishabh’s feelings? What will Sherlyn’s next move be? Stay tuned to find out!

In The Mood To Get Spooked Out? Watch ZEE5's Original Series Parchayee!