Dheeraj, known for his portrayal of Karan Luthra on Zee TV show Kundali Bhagya, was named the TV Personality of the Year 2019 at Label Awards. 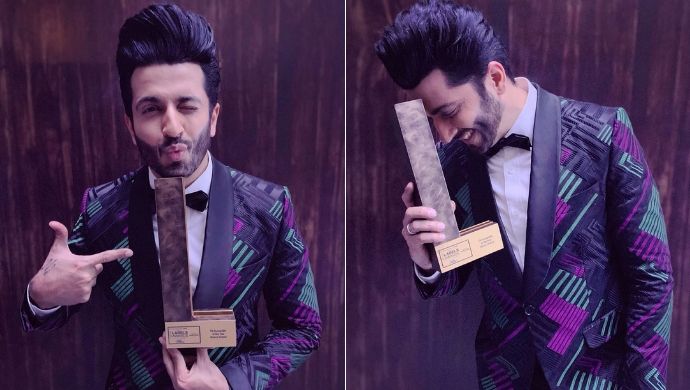 Television actor Dheeraj Dhoopar is on cloud nine these days! The dapper star, popularly known as Karan Luthra, after his character from Zee TV show Kundali Bhagya, has been bagging laurels and accolades for his finesse, on and off the screen. For those living under a rock, Dheeraj enjoys a massive fanbase and has social media accounts dedicated to his onscreen chemistry with actress Shraddha Arya from Kundali Bhagya. Thus, it comes as no surprise that he recently won  ‘TV Personality of the Year 2019.’ Earlier this morning, he took to Instagram to announce the addition of yet another feather in his already crowded hat and shared pictures too.

Dressed in a purple, green and black tuxedo look, the handsome actor looked dashing as ever, totally making it to our #TuesdayTreat list. His charming avatar and that radiant smile are a tonic for the tired eyes after all. “Always always Happy to be appreciated and as usual short of words! TV Personality Of The Year 2019,” Dheeraj wrote alongside pictures of his win at the Label Awards 2019.  Check out the pictures here in case you haven’t seen them yet:

Last month, Dheeraj swept another trophy as he was honoured as the ‘Most Charismatic Performer of the Year’ at the recently concluded India SME Awards 2019. The telly town celebrity had then shared a picture of him kissing the coveted trophy, on the picture sharing platform.

They say beauty is the opposite of perfection, it’s about confidence, charisma & character.. Awarded tonight for being The Most Charismatic Performer of the year at India SME Awards 2019 🌟

Dheeraj’s portrayal of a flamboyant cricketer has earned him the love of millions of females and the envy of men equally. His cute banter with Shraddha’s Preeta Arora has been the major highlights of Kundali Bhagya, which has been ranking on the top spot in BARC ratings for consecutive three weeks. On the personal front, Dheeraj recently flew to Jodhpur and brought in his dearest wifey Vinny Arora’s birthday at the royal Umaid Bhawan Palace.

Professionally, Dheeraj was to host the Dance India Dance 7: Battle of the Champions (watch all the seasons here) but opted out before the show went on air. He has been replaced by actor-anchor Karan Wahi while Dheeraj continues to rule hearts and the TRP charts as Karan Luthra.

Coming back to his win, we wish the star hearty congratulations on the glorious victory!