Soon to be seen in a ZEE5 Original series as Rehana Chaudhari, Mandana Karimi was interviewed by ZEE5 on its 2nd-anniversary celebration! Watch video 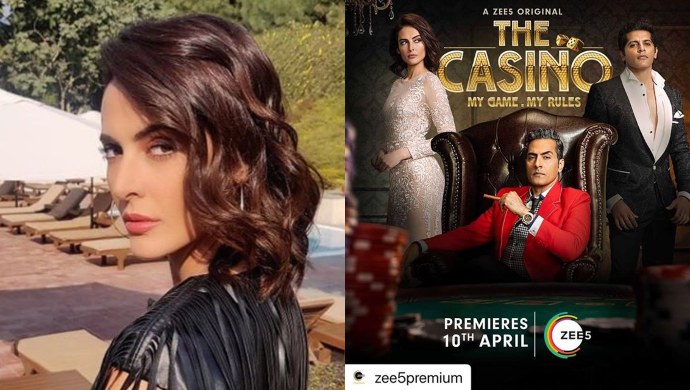 Starring Karanvir Bohra, Mandana Karimi and Sudhanshu Pandey in the lead roles, the upcoming ZEE5 Orginal series The Casino, is a revenge and crime drama. The story revolves around a boy Vikramaditya Singh Marwah aka Vicky, who is a rich yet simple and loving boy. He is the heir of his father’s multi-billion casino that everyone has their eyes on! The ravishing Mandana Karimi essays the character of Rehana Chaudhari who is close to both Vicky and his father Shivendra Singh Marwah aka Marwah. Rehana is a tall and beautiful woman who men are mad about. She is the star of ‘Casino Celebre’!

Mandana Karimi took time out and did a fun interview with ZEE5, along the star-cast of The Casino, at the 2nd-anniversary celebration of the largest OTT platform in India. Here’s what she had to say:

1. How would you describe your character Rehana Chaudhari in The Casino?

She is a very strong woman and a go-getter! She knows exactly what she wants! Also, how to exactly get it and from who! She’s a very interesting and intimidating woman.

2. How was your experience of sharing screen space with Karanvir and Sudhanshu both?

Seriously it was great! My character has a very close relationship with both of them. It’s my first time working with them. We had this instant connection from the first look test itself! I do love them, but they annoy the shit out of me. I call them Guruji (Sudhanshu Pandey) and Baccha (Karanvir Bohra)!

3. Did you derive from personal life to portray your character?

I don’t really try to relate with my character and I don’t look for similarities. What’s important is to read the character well and the understand what she desires. Secondly, I don’t behave like Rehana, I use my imagination. I’ve learned that one shouldn’t use real-life situations to project an emotion!

4. How similar or different is Mandana from Rehana?

One thing that could be a similarity is, Mandana and Rehana, both are very strong! We never give up. There are moments in the show when you think she is done, but she comes back even stronger. That’s actually how I am!

5. Which character among Rehana, Vicky and Marwah is the tagline ‘My Game, My Rules’ for?

It’s for none of us. It’s for the entire show because you will see all the characters, not just the three of us, fighting for power! The way they play their rules, the standards of their life and how far can they go to achieve a desire: this life is for that!

Let us know in the comments section what do you think of The Casino and Rehana Chaudhari? Also, hop on to ZEE5 Originals and catch up with your favourite web series!