Missed Out On Seeing Wiz Khalifa In India During His Sunburn Tour? ZEE5 Has You Covered!

Wiz Khalifa performed in India last month, if you missed out on his concert, you can watch the entire one hour performance exclusively on ZEE5. 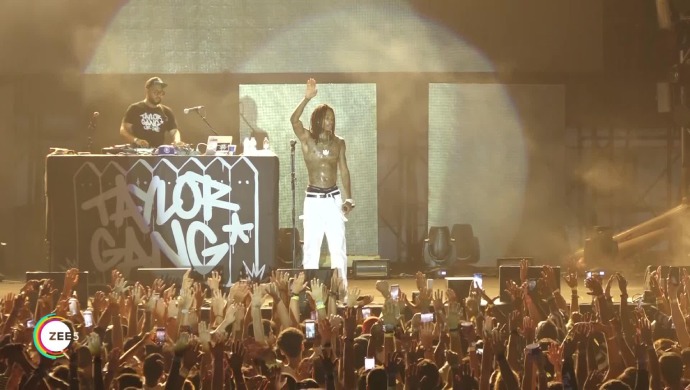 In September 2019, Wiz Khalifa made his debut performance in India with his two city tour of Delhi and Mumbai. Sunburn which specialises in bringing big international acts to your city, really drew in the crowds with this show. This show also promoted indie artists like Raja Kumari, Monica Dogra and Ananya Birla as opening acts to Wiz Khalifa during the two shows.

If you missed out on seeing him live, ZEE5 has got your back. Watch his entire one-hour performance in the Mumbai show exclusively on ZEE5.

The video might not always capture the best audio but that’s not what live shows are about. You get to see the adulation he receives from the audience during his songs. Wiz Khalifa is a Grammy-nominated artist with a worldwide audience which a amply evident in the Mumbai concert.

Wiz performed his all-time hits including, ‘Black and Yellow’, ‘Young, Wild and Free’, ‘Work Hard, Play Hard’, with the backdrop of a big LED screen adding to the music experience. He signed off with his popular track ‘See You Again’ which we can only hope is a promise to come back soon for another show.

Until then you can play the live recording to get the live experience at home with a special interview coming soon.  You can also watch the other upcoming acts like Dmitri Vegas and Like Mike, as well as Alan Walker, in concert streaming live on ZEE5.