Mona Singh On KKHH3: Ananya Has Taught Me To Not Lose Identity And Ambition In Marriage

Ananya is the other woman but is not the villain, in fact, a victim. Mona Singh shares her story in Kehne Ko Humsafar Hain Season 3 with ZEE5. 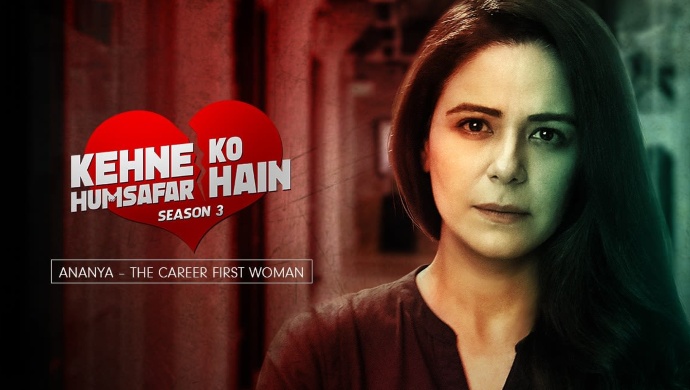 #RishtonKiUljhan has transitioned into different and deep dynamics with Season 3 of the romantic-drama series Kehne Ko Humsafar Hain. Portrayed by Ronit Bose Roy, Rohit Mehra’s life is spiralling out of control as he engages in meaningless relationships to fill the void in his heart. Poonam Kapoor, played by Gurdip Punjj, is leading a blissful married life with Abhimanyu but, of course, with her insecurities. On the other hand, Ananya, essayed by Mona Singh, has immersed herself in work and is disconnected from his three-year-old son Kabir. To shed some light on the complicated story with new twists and turns, Mona Singh graciously got in touch with ZEE5. Read the full exclusive interview to know some fun anecdotes from the sets.

Watch the promo of ‘Ananya, the Career-first Woman but over-ambitious Mother’ here:

1. How has your character, Ananya Sharma grown in the third season?

Well, in the first season, Ananya was all about being independent and in love with a guy. She did not believe in marriage as much as she believed in true love. Then, season 2 was the time when she actually got married and was happy with Rohit. But, the fact that Rohit never kept her as his first priority bothered her. Ananya had started ignoring her work, career, ambitions and dreams, and kept Rohit first always. So, that was one thing about which Ananya felt that she shouldn’t be doing this anymore. Eventually, it is her life and it is about prioritizing her goals and keeping herself first.

2. What are the changes that the audience will get to see in this new part of the story?

Of course, Ananya finds out that Rohit cheated on her. From then on, Ananya has gone super-duper cold. She doesn’t want to talk about her issues. She doesn’t want to confess to anybody about whatever she’s going through. She hates confrontation. She runs away from love and doesn’t believe in it anymore. She is close to her son but still very detached, not because he is Rohit’s child but just because she is scared of loving again. She thinks, if she loves her son too much, one day, he will also leave her and go. This toxicity of love has made Ananya very hard and cold, as a person. But, everything changes when she plans to come back to Delhi and she bumps into Rohit, accidentally. That was, I think, my best scene in season 3. She feels so toxic that she is not able to handle it and she pukes. So many emotions burst out of her and it’s shot very nicely.

3. How did you convince yourself to do a role that deals with divorce and infidelity so strongly?

See, I have many friends who have either had a bad relationship or who have been in a toxic marriage. Sometimes, it’s also the narration that we get about the story. Then, it’s also the longevity of the character that I’ve been playing for so long, this is the third season! And I’ve been living Ananya from season 1, since 2017. So, for me, it’s been a fabulous journey. And also, I think, theatre makes one a better actor if I don’t want to sound modest (laughs)! It’s all about the experiences that you absorb from the outer world and bring that inside you. That’s what exactly helped me with Ananya’s character.

4. Can you share anecdotes from the making of the series on the set back then?

The thing is that Ronit and I are in love with each other in the series. We share a lot with each other and we are super close. Our scenes are written and executed beautifully. But, the problem with me is that I call him dada, all the time. So, our director was fed up of me. He used to tell me, Mona, we’re shooting a romantic scene here and you’re calling him dada! I’m like, arre yaar, I’m used to calling him that. The other day, with a zoom video call with ZEE5, for promotions. Yet again, I was calling him that. The host pointed out, arre what is this dada business going on? So, that’s how actors are. This is what I feel about Ronit but once the camera is rolling, we play the character. So, this was always a funny thing between Ronit, me and our director. He used to beat his head on the wall and say to stop calling him dada.

5. Who is more fun to work with among Ronit Roy and Gurdip Punjj?

I hardly had any scenes with Gurdip. But, whenever I am with the entire family cast, all of us gang up against Ronit. And we tell him that tumne biwiyaan bhi chuni toh dono sardaarni. One Gurdip Punjj and one Mona Singh! Then he says arre yaar mujhe maaf kar do. Normally, he is the bully but when Gurdip and I are together, we make sure to take Ronit’s case!

6. You got married recently. If Ananya gives marital advice to Mona Singh, what would it be?

Ananya’s advice on marriage, to me, would be to definitely not lose my identity. To not miss out on my dreams and goals in life. To have my own space. To not choke the other person in the marriage to be with me 24 by 7. I don’t want to be that kind of a person. That’s one thing I have taken back from Ananya. What I will not take from Ananya is her unforgiveness. She is not a forgiving person and I’d like to forgive. I think understanding is very important in a relationship unless the person has gone bad in the marriage and cheated on you. Otherwise, one should be a little forgiving.

7. How was it to switch-off from the fun on set and switch-on to emote intensely in scenes?

Initially, I did not understand the whole game switching on and off. I don’t come from an acting background. Whatever I’ve learnt, it’s from the industry, on my own, while shooting. So, I used to realise one thing that if I’ve done an emotional scene, I will be emotional all day because of that. Somewhere, I had to switch-off. I had to tell myself that it is ok, don’t think too much about it and don’t have headaches over it. Eventually, I realised that one has to switch-on and switch-off. One has to be in the mood when the camera is rolling, otherwise, just get over it and have fun, chit-chat around and be normal. I used to carry the baggage home, seven/eight years earlier. Now, I’m pretty okay. I really don’t care about switching on and off. It just happens automatically. It’s a button that presses on its own. If I’m doing a scene, I’ll be 100 per cent into it. What I don’t want on the set is people in front of my eyes. I’ve got that eye-line issue. It should only be the cameramen and people around me should not stare at me, all the time. Every time the director said “action”, the ADs made sure that they run away in corners.

8. How do you feel about Kehne Ko Humsafar Hain Season 3 streaming on Zee TV and ZEE5?

This is brilliant! Most of the people are locked up. All of them are at home. And this is the time to watch such shows, which, normally, you don’t get to watch on TV anymore, which is why this whole web-shift happened. Most of the TV shows are all about the same family-drama and one villain plotting against the family. Otherwise, there is some village set up. So, I’m very excited to know that it is airing on these platforms as it will maximum reach to the audience. Of course, it’s up to them to decide whether they like it or don’t. The webspace has already appreciated our show, hence season 3 was being made.

9. What impact do such shows have on the booming OTT platforms, which were said to be for TV?

Yes, this show is different from the family-drama or saas-bahu stories that were shown on TV in the 90s. Later, they stopped being made because the audience didn’t watch such shows anymore. And OTT platforms like ZEE5 and ALTBalaji have appreciated our show so much. I remember that last year, I kept getting messages that when is season 3 coming out? I’m very glad that such shows are being so well received in the web space. Otherwise, Indian content, if you see, on the web, is all about drugs and mafia, gangrape and sex, etc. This is a unique story too and I’m sure people will love it. They won’t be disappointed at all! The fact that Ananya is never shown in a bad light says volumes. If this was a TV show, Ananya would have been made a villain, who is a home breaker, planning and plotting to destroy Rohit’s family. But, that is not the case. She is just a normal independent like any other, and that is what I love the most about the show. People can relate to Ananya.

10. Lastly, name three reasons why the audience should watch KKHH3?

There’s more of Anna (Ananya) and Rohit but in a different way. There’s a big surprise for them in the end, which, obviously, I will not give away. There is going to be a lot of drama. And it is season 3, which everybody has been waiting for!

Watch the talented Mona Singh as Ananya Sharma in all the episodes of Kehne Ko Humsafar Hain Season 3, streaming on ZEE5.

Ronit Bose Roy: My Preparation For KKHH Is Such That I’ll Have To Write A…

Vinay Pathak: Chintu Ka Birthday Is A Story Of Hope That Will Resonate With Our…

Birthday Special: How Ekta Kapoor Took To The Throne Of Television And Became…

You can also watch Khwaabon Ke Darmiyaan, a UAE-based business-drama television series in Hindi, only on ZEE5.