Mukku From Kedarnath Or Shagun From Simmba: Which Role Of Sara Ali Khan Is Your Favourite?

In Kedarnath, Sara played a motormouth Mukku while in Simmba she played the bold and bubbly Shagun Sathe. Which role is your favourite? 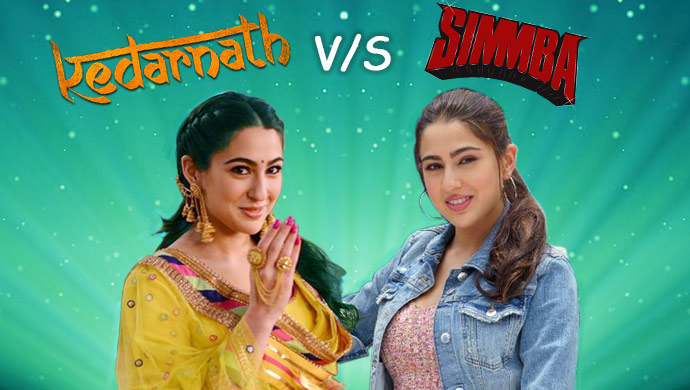 Fridays are a make or break when it comes to a film’s or an actor’s fate on box-office. A debutante has butterflies in her stomach, and an equal amount of nervousness that sets in from time to time. Pataudi Princess Sara Ali Khan seems to be no exception! With two films releasing back to back in the same month, the promising fresher won all hearts with two varied roles in Kedarnath and Simmba.
Sara had first signed Abhishek Kapoor’s Kedarnath but after it courted controversies, she went ahead and bagged Simmba. However, Sara made her debut alongside Sushant Singh Rajput as was initially planned and starred in Ranveer Singh’s cop caper later. The trailer of Kedarnath, followed by interviews where Sara beamed with confidence got our expectations through the roof about the newbie. And boy, weren’t we right? Never in a scene did she make us feel that this is the first time she is acting on the silver screen.
In Kedarnath, Sara played a motormouth Mukku, a role she can be easily identified in her real life. Even in Simmba, she is a bold and bubbly girl with outspoken ways. However, Mukku is the daughter of a Hindu Brahmin priest in the holy town of Kedarnath who falls in love with a Muslim pitthu Mansoor (Sushant). As for the Rohit Shetty directorial, Sara’s character Shagun Sathe is set in the fictional background of Shivgad. Kedarnath is an off-beat love story whereas Simmba is a typical Rohit Shetty masala entertainer.
Although both the films released within a short gap, new talent was born in the industry. Until Sara treats us to more of her scintillating performances, we’d leave you to decide which of her previous portrayals did you like the most – Kedarnath or Simmba?
Don’t forget to catch the world digital premiere of Simmba on ZEE5 on March 21, 2019!

Section 377 Verdict: All You Need To Know About SC's Ruling To Decriminalise Homosexuality