Heavy rains on Friday and waterlogging paraded all over Sriti's weekend plan. Scroll to see how Pragya Arora made the most of it with 15 strangers. 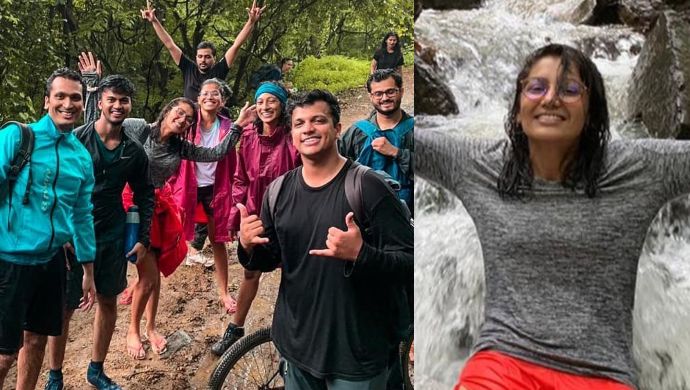 Torrential rain brought India’s financial capital to a standstill last weekend. As heavy downpour continued to lash the city, transportation was thrown out of gear including Mahalaxmi Express, a Mumbai-Kolkhapur train, stalling on flooded tracks. Actress Sriti Jha, too, was affected by the weekend rainfall and waterlogging as Mumbai monsoon paraded all over her weekend trekking plan. The Kumkum Bhagya actress had booked for a trek to Harishchandraghad, with 15 strangers, through Vagabond Experiences. The television celebrity along with others waited at Kalyan Bus Stop for hours only to have Friday’s rain wash off all their hopes. With knee-deep water everywhere and a no-go situation, Sriti and her co-trekkers sought shelter at a stranger’s place for the night.

The starlet and others stayed up playing games on Friday night and had rescheduled a trek to Garbett Plateau on Saturday. However, the situation didn’t improve and that plan too got cancelled. Eventually, Sriti and co. decided on going to Sanjay Gandhi National Park, in Mumbai’s Borivali area and cycle/walk there. Once again, she set out on an adventure to SGNP, only it involved cycling this time. She thoroughly enjoyed her outing with 15 people who she had met for the first time, and the made the most of a monsoon weekend. Check out pictures and videos from her getaway here:

The weekend that was (Part 1/3) Reposted from @adwait17 ————— Date: 26th-27th July 2019 . . Every Vagabond Experience has a story. That is what I have been saying for the last 9 months that I have been leading trips for them. But this story is a first of its kind because Vagabond had never faced something like this before. Being able to write about this today, I just want to say “I’m glad to have been a part of this” . . Someone rightly has said: “True courage is being able to smile in the face of adversity while embracing one’s own vulnerability” . . . 16 individuals were leaving on Friday for this weekend’s trek to Harishchandragad when adversity struck. We generally leave from Kalyan Bus Depot at 10 pm but in this story, we never left that place. Our trains which had left Dadar at 9:38 PM had reached Kalyan at 12:15 AM. There was ‘hope’ that the bus would come and we would leave and the trek would happen, but the bus that would take us NEVER arrived. Water levels in places such as Badlapur, Murbad had gone above 220mm+ and it wasn’t safe anymore. . . Saturday, 2:00 AM: Vagabond ‘cancelled’ an event for the first time in this manner. It was a NO GO situation for sure, but with water everywhere almost up to our knees and no Cabs/Trains/Autos to take us back home, where would we go?? (I cannot tell you how difficult it was to say it to the others, because I was not able to believe it was happening and I was almost in tears. How to say something like that in person? I was representing a company and they were strangers and I wasn’t any “friend”) . . Help Arrived – This is a special shoutout to Jonathan Kale (who reached Kalyan from office at 1:07 AM) and his beautiful family who gave us shelter at their home at 2:30 am. 20 people in a 2 BHK house. We beautifully managed. . . Imagine the frustration you would feel if you cleared off your entire weekend’s schedule/came with us for the first time/ITS YOUR BIRTHDAY on one of the days during the trek, and this happens. That didn’t deter anybody…… . . [Contd in Next Post] #VagabondExperiences #VagaFam #Strangers #Work #Life

A post shared by Vagabond Experiences (@vagabondexperiences) on Jul 28, 2019 at 9:38am PDT

The weekend that was (Part 2/3) Reposted from @adwait17 ————— Date: 26th-27th July 2019 . Through the entire night we played games, shared our stories, and decided what we could do next. The enthusiastic bunch agreed on Garbett Plateau trek that is nearby (A trek that we love doing, and we wanted to see everyone go back happy) and literally EVERYONE agreed even after we said we would refund the money and they could just go back home. 6:45 am we were to leave. I was on my phone checking M-Indicator for almost the entire night. . . 6:45 AM. Bad News. We didn’t leave. Garbett Trek couldn’t happen. (I had to break that news) Vangani station was FLOODED. Matheran had 400mm+ water level by then. There were no trains between Badlapur and Karjat. Hopes dashed again. We quickly grabbed breakfast and came back to the house to collect our belongings and leave. 9:45 AM: The moment that moved me to tears: People kept speaking about wanting to STILL do something. Someone said SGNP and “Cycling”. 1 hand went up. 2 hands went up. 4 hands up. All hands went up. EVERYONE AGREED. We decided to quickly leave from Kalyan and go to SGNP, Borivali and either do a trek/sit by the stream and walk/cycle. . . 6:00 PM: And WE DID EVERYTHING! Everyone enjoyed thoroughly. No one spoke about the previous night anymore. The show wasn’t over yet. People weren’t ready to leave each other after what they all went through. The guys went for Dinner after that. And yet again, “It was E-V-E-R-Y-O-N-E” . . [Contd in next post]….. #VagabondExperiences #Vagabond #Strangers #Friends #Family #TheWeekend #SGNP #Madness #StoryToTell

A post shared by Vagabond Experiences (@vagabondexperiences) on Jul 28, 2019 at 9:40am PDT

The weekend that was (Part 3/3) Reposted from @adwait17 ————— Date: 26th-27th July 2019 . A ’Vagabond Experiences’ trip did happen. ‘Vagabond went cycling today’ is what it became for everyone. There were a few emotional moments when everyone was leaving, because NO ONE wanted to go. No one wanted it to end. But every good thing has to end for something else to begin. We at Vagabond always say: ‘At least take back ONE friend from the trip!!’ All I could hear was: ‘Today I took back EVERYONE as a friend’ :’) ————————————— Adversity. Vulnerability. Hope. Surrender. Courage. Happiness. Enthusiasm. Family. – It had it all. . . Thank you, and all my love to @itisriti, @saurabh_saboo2000, @letters_are_dancing (Aakash), @siddhantgangwal, @experientialdotes, @akhyjain, @dj_dipika, @_akshaya.krishna, @agnayyy, @_khushaaa_ , @sumedha_bhargava, @harshal.ahuja, @succumbingtolife, @iamark.01.12 for being the beautiful Superhumans that they are and choosing us and supporting me and my entire team on ground (@rachael_mic, @inn_sanee and @whojonathan Jonathan) . . 'We are, because YOU are’ and I do this on the weekend everytime because of moments like these and people like you guys! – Team @vagabondexperiences Written by: Adwait Bhattacharya . ————————- . Credits- Superhumans: Sriti, Saurabh, Akshay, Siddhant, Godwin, Akshay, Dipika, Akshaya, Rishabh, Kashish, Sumedha, Harshal, Madlin, Mark, Kale Family. Ground Support: Rachael, Syed, Jonathan My BackBone: Shannon, Elton, Nihar and Mariella ————————- . . . When was the last time you did something for the first time? #VagabondExperiences #Weekend #WeekendsWithVagabond #Stories #HumansOfVagabond #Madness

A post shared by Vagabond Experiences (@vagabondexperiences) on Jul 28, 2019 at 9:41am PDT

For the unversed, Sriti has been frequenting trips to Sanjay Gandhi National Park with her Kumkum Bhagya co-stars off late. She first hung out there with Krishna Kaul. Sriti had a fun-filled trip with Shabir Ahluwalia, Mugdha Chaphekar and others too later. She recently even enjoyed a mini-vacation at Goa, ahead of which she bumped into her onscreen daughter Naina Singh at the airport.

Needless to mention, Sriti Jha works hard and parties harder. We love her spirit of exploring and the travel bug she is, cannot wait to see where she is off to next!

EXCLUSIVE: Garima Rathore Is Not Quitting Manmohini, Show To Take A Five-Year Leap