Nag Panchami 2019: This year, Nag Panchami will be celebrated on a Sawan Somwar on 5 August 2019. Snakes are worshipped and fed milk on this day. 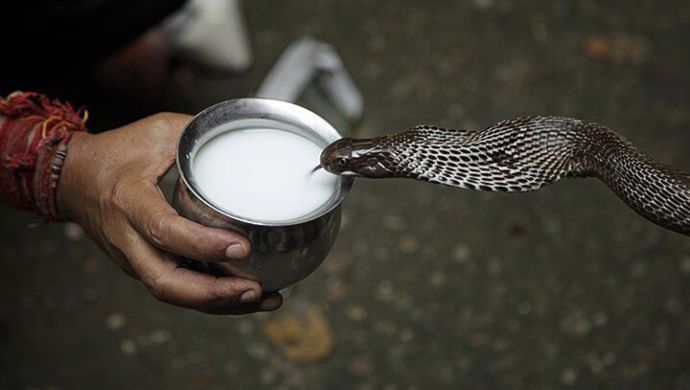 Sawan or Shraavana is the fifth month in the Hindu calendar and is considered to be very holy by and for Hindus. Sawan 2019 began on 23 July 2019 and will last up to 22 August 2019. These 30 days is a month full of festivals like Hariyali Teej, Rakshabandhan amongst several others. Every Sawan Somwar (each Monday of this month) is said to be auspicious. Sawan is all about offering prayers to Lord Shiva and is synonymous with him. Devotees all across the world observe fast on specific days and worship to Gods and Goddesses to fulfill their desires. Nag, in Hindi and Sanskrit, translates to a snake. As per the Hindu calendar, Nag Panchami falls on the fortnight of the lunar day in Sawan. This year, Nag Panchami 2019 will be celebrated in several parts of Indian on 5 August 2019, which coincidentally is also a Sawan Somwar.

Nag Panchami is brought in by revering snakes and offering them milk, rice, flowers, and adoration in exchange for their blessings.

Snakes have a significant place in Hindu mythology. Lord Shiva wears one around his blue neck while Lord Vishnu sleeps on a snake with many faces. Snakes, under the Hindu mythology, are said to belong to the Nag Loka. They are worshipped on Nag Panchami so as to protect us all from evil forces. One of the oldest legends has it that Nag Panchami is celebrated because of Lord Krishna. A deadly snake Kalia was poisoning the Yamuna river and was defeated by Lord Krishna in an epic battle. He took back all the poison from the river but only when Lord Krishna blessed him saying whosoever will offer prayers and feed milk to the snakes on Nag Panchami, will stay trouble-free.

Another widely accepted legend is the ‘samudra-manthan‘ chapter from the mythology. When the ocean was churned, the devas (Gods) and asuras (devils) divided all the magical herbs and potions that came out. During the devas turn, the ocean threw a pot of poison deadly enough to wipe out the universe. To save the creation from destruction, Lord Shiva gulped the poison without swallowing it, which is why he is shown to have a blue neck. The blue colour symbolises the poison. However, a few drops of it fell on the ground and were consumed by his aides – snakes. A Ganga Abhishek was performed on Shiva and the snakes to offer some relief from the burning sensation of the poison. Experts suggest the offering of milk to snakes and idols of Lord Shiva is somewhere associated with this episode of Hindu mythology.

A chapter in the Hindu epic Mahabharata also is tied to Nag Panchami. Janamejaya, ruler of the Kuru Empire performed a fire sacrifice – Sarpa Satra Yagna – for 12 long years to put an end to the snakes’ race. His father Parikshita died due to snake bite of Takshaka, the king of snakes and to avenge his death, Janamejaya wanted to kill the entire species. However, Astika, the Brahmin son of Jaratkarus, stopped the yagna on the shukla paksha panchami day of the Shraavana month. His act saved the race from extinction and ever since the day is observed as the Naga Panchami festival.

Nag Panchami 2019: Vermicelli Kheer recipe to make on this occasion

Milk is a crucial and vital component of Nag Panchami celebrations. The custom of making vermicelli and rice is religiously followed by devotees on this day. Let us tell you how to make vermicelli or sevai ki kheer on Nag Panchami.

1. Put butter in a heated pan and fry sevai in it.
2. Next put cashews, almonds, and raisins in it and fry them with the sevai.
3. Take milk in a separate pan, add sugar and cardamom and boil it well.
4. Now put the fried sevai and dry fruits in the milk pan. Mix all the ingredients well.
5. You can add more milk if you don’t want it to thicken.
6. Serve hot. Adding drops of rose essence is optional, but can enhance the taste.

Some devotees also feed Brahmins on the occasion of Nag Panchami. People wake up early, bathe and put on new clean clothes and offer their prayers to the deity. In some parts of India, people decorate their house with beautiful rangolis in sandalwood or turmeric paste and even draw up a snake on their wall and doors and decorate it with rice, flowers, curd, etc.

If you are a football fanatic, check out the new ZEE5 Original Bombers, a sports drama centered around a football team.

Friendship Day: Kundali Bhagya's Karan And Preeta Will Remind You Of Shah Rukh And Kajol