Nakuul Mehta Opens Up About Kissing His Best Friend In Real Life: It Was A Litmus Test

Nakuul, who makes his digital debut in the upcoming ZEE5 Original,recently attended the ZEE5 January 2020 calendar launch event looking dapper as ever 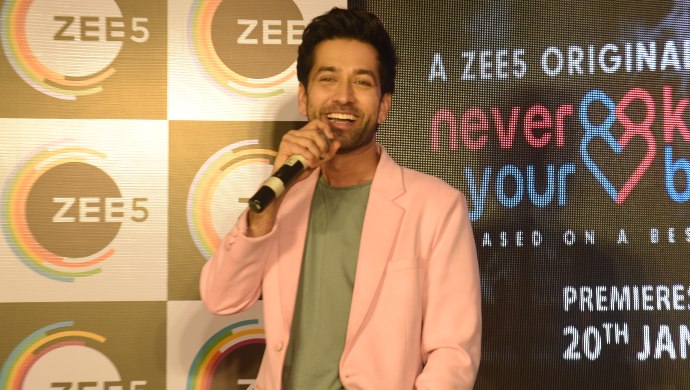 Television heartthrob Nakuul Mehta, will soon be seen as the male lead on ZEE5 Original Never Kiss Your Best Friend opposite Anya Singh. Nakuul, who makes his web debut with the series, plays Sumer Singh Dhillon, while Anya’s character is named, Tanie Brar. The story plays across two timelines; their youth when their friendship was the highlight of both their lives, and their adulthood when they meet after years of being apart . Dressed in a blush pink blazer suit, Nakuul recently attended the ZEE5 January 2020 calendar launch event looking dapper and dashing as ever. Soon after the teaser reveal, host Rishi Kapoor asked Nakuul if he has ever kissed his best friend in real life.

“Ho chuka hai!,” chuckled Nakuul. He further added, “I was the most experienced to do this role. I did kiss my best friend and now I am married to her.” Speaking about the reactions after the kiss, he said, “From my end, it was an interesting reaction honestly. It was great because as soon as the kiss happened we realized being best friends is not happening, doesn’t work. It was actually a litmus test. The kiss was so good that I knew I had to marry her!”

Nakuul was joined by Vivek Mushran and Rituraj Singh at the event, who play Anya and his father on the series, respectively. Touching upon his experience of working with the experienced duo, the handsome hero revealed, “The first time I saw Vivek Mushran Sir, Ilu Ilu was playing in my background. When I met Rituraj Sir, I realized this was going to be fun as we had scenes where he had to slap me. The  fact that I am standing with these two, is in itself a great experience for me.”

Never Kiss Your Best Friend, an adaptation of Sumrit Shahi’s best-selling novel, is a millennial love story relevant in today’s time. The 10-episode series is a story of two best friends, reconnecting after a long period of separation. Throughout the show, we experience the existence of a curious history between them, as they grapple with their complicated feelings for each other. It is scheduled to premiere on ZEE5 on January 20 2019.

Exclusive! Harleen Sethi: It Was Surreal To Dance To My Own Rendition Of Teri…

#FlashbackFriday: 8 Moments On Kumkum Bhagya That Made Us Cry

Ragini MMS Returns Season 2 Review:A Horror Series That Keeps You On The Edge Of Your Seat