#NationalTellAJokeDay: Share A Laugh With The Stand-up Comedians Of Comedy Shots

From Rahul Dua to Aadar Malik, here's a compilation of funny tweets from the comedians of Comedy Shots that will make you re-watch their episodes 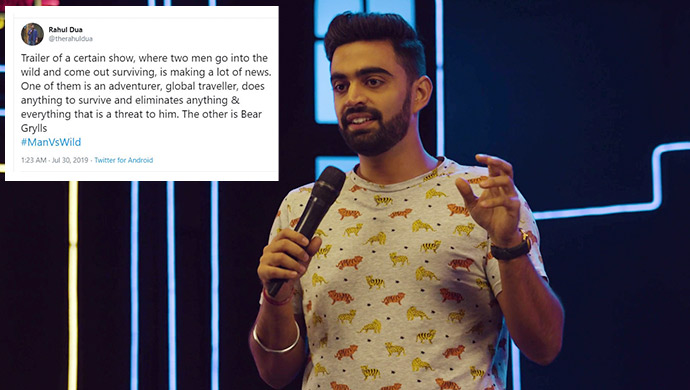 It’s National Tell A Joke Day (16th August), and to be honest we could all use a laugh. Jokes are meant to be taken lightly and cut the tension. Who better than the comedians of Comedy Shots to give us a case of the giggles. While Pratyush Chaubey uses his personal life to tell jokes, comedians like Sanjay Rajoura use satire to comment on current issues. Nevertheless, every comedian puts a part of his funny self on Twitter. Here’s a compilation of their recent jokes on Twitter that will convince you to re-watch their episodes.

Watch a promo of the latest episode here.

To start us off, we go for the pair that started off with the first episodes of Comedy Shots, Rahul Dua and Anubhav Singh Bassi. Both of them have taken a funny take on the recent political situations in the country. While Rahul Dua jokes about Narendra Modi’s appearance on #ManVsWild, Anubhav Singh Bassi makes a connection between the Kashmir situation and TikTok videos.

Trailer of a certain show, where two men go into the wild and come out surviving, is making a lot of news.
One of them is an adventurer, global traveller, does anything to survive and eliminates anything & everything that is a threat to him. The other is Bear Grylls#ManVsWild

Moving away from the political and social comedy, we have Sumaira Sheikh and Sumit Anand. They both gained popularity for their funny one-liners, however both of them weave very funny stories on their episodes of comedy Shots. Here Sumit Anand, who is performing at the Edinburgh Frings talks about his dislike for travelling. Sumaira Sheikh shares a tweet about the day her life changed.

I like to get bored in different locations, people call this travelling!

I try to change my lifestyle IN ONE DAY. It changes only for one day.

Aadar Malik is a singer-comedian, whose jokes center around the theme of summers and vacations on Comedy Shots. He recently shared an old tweet about Sushma Swaraj where he jokes about how quick and prompt she was at handling people’s problems. He even pays respects to her in a later Tweet saying how she shared his jokes on her Twitter feed too.

Made jokes about how prompt she was on Twitter about attending to problems. She would actually share those. A sense of humour about herself while taking her job very very seriously, really made me admire this lady. #RIPSushmaswaraj

Pratyush Chaubey has developed his voice of self-deprecating, personal and awkward comedy that is hard to resist. On Comedy Shots he relates his personal life to the population explosion in India seamlessly. Here’s a Tweet that is a perfect example of his kind of humor revealing the only kind of abuses that affect him anymore.

Watch these comedians and more on ZEE5’s first stand-up comedy original Comedy Shots. Let us know the favourite jokes or your favourite comedians from the series in the comments below.