Parchhayee Episode 5 Trailer: Shakti Kapoor Scares The Living Daylights Out Of You 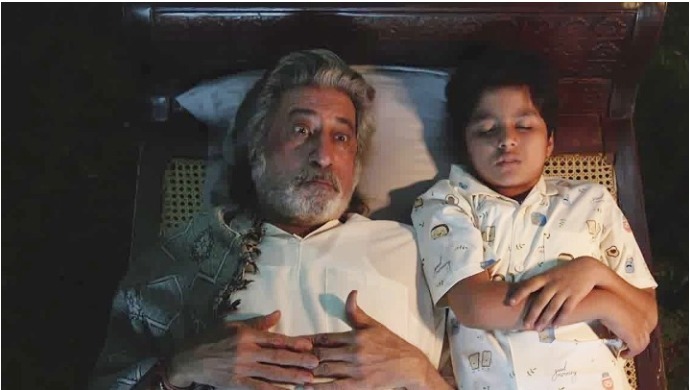 Iconic writer Ruskin Bond’s popular stories have been adapted into a series by online streaming service ZEE5. A healthy mix of horror and entertainment, the four episodes released so far have us hooked and booked for the next ones! The latest episode in the series titled Parchhayee: Ghost Stories by Ruskin Bond shall see Bollywood veteran Shakti Kapoor take charge of the tale. The upcoming episode is called Astley Ka Intezaar.

The one-minute trailer video offers a sneak peek of what the makers have in store of us. Known for his comical and villainous act in over 700 films, Shakti’s portrayal of a loyal, royal caretaker is simply spellbinding. Not only does the episode feature him in a fresh role but it also leaves us wanting to see more of our Crime Master Gogo.

The trailer clip opens to a shot of Shakti Kapoor opening the doors of a beautiful, magnificent castle where he works as a caretaker. The background score follows a voice-over by the actor himself, who narrates how it is a common belief that his master Robert Astley is no more. In rushes that begin with Shakti filling the bathtub for his master to take a bath, he goes on to describe a young boy that even Robert’s paternal cousin believes he will return one day for sure. The next few scenes feature Shakti going about his regular routine – cleaning his master’s shoes, preparing breakfast for him and even keeping his car ready. All this with no sign of Robert in the castle. Or wait, is he already there but invisible to the world?

The video also shows two other characters, presumably and evidently the caretaker’s daughter and son-in-law. The latter assumes that ‘Casa,’ the grand haveli could have been handed over to his father-in-law and; eyes to confiscate the property. In the scenes to follow we see how the caretaker’s daughter and son-in-law talk to him about the castle but he refuses. They then go on to have a gala time, but are interrupted by someone or probably some unseen force. Is that Robert Astley you think?

The caretaker is committed to his master, and even after 30 years of his disappearance doesn’t fail to fulfill his duties. But besides the mystery and some spine-chilling moments tucked in between, the trailer begets chills and screams in equal parts. Mystery, horror, thrill, suspense all make an appearance one scene at a time and leave us wanting for more!

The string of chandeliers, exquisite artifacts, antique pieces of furniture maintained like brand new by the caretaker – all add to the stellar watch! Overall, Astley Ka Intezaar makes for one promising watch, with sleepless nights to follow in all probability.

Watch the mystery of Astley Ka Intezaar, Episode 5 of Parchhayee: Ghost Stories by Ruskin Bond, unfold on ZEE5 on March 15, 2019.