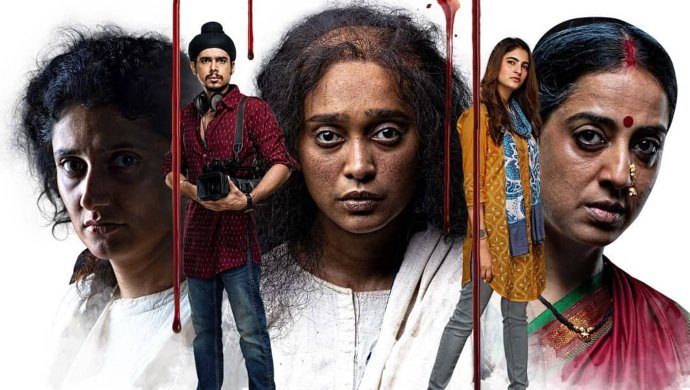 With a nearly bald head of hair reflecting deeply upon the state of despair, eyes that see her dead mother everywhere and arrogance mistaken for ruthlessness, Sayani Gupta as Regha Sathe in Posham Pa, is one of the best onscreen makeovers of 2019. You may recall her as the fearless Damini Rizvi Roy from her last web outing, but the uptight and righteous girl disappears into the body of a weary, bedraggled criminal on a death row. Not just Sayani but Mahie Gill, too, undergoes a metamorphosis for this ZEE5 Original film. Of course, dark and disturbing has been the Saheb Biwi Gangster 3 actress’ forte but Posham Pa is a different ballgame altogether. Even Ragini Khanna, one might recall her as the vivacious daughter-in-law from a popular soap, sheds her skin.

Posham Pa is inspired by true events, the life of serial killer sisters Renuka Shinde and Seema Gavit. These half-siblings are the first female duo to be awarded the death penalty in India, after 1955. Ragini essays Shikha Deshpande while Mahie plays Regha and Shikha’s mother Prajakta Deshpande. In 76 minutes, Suman Mukhopadhyay digs deeper into the hard shell of Regha, Shikha, and Prajakta, bringing out the emotional intensity of a rather thrilling and chilling narrative.

Regha’s opening act sets the mood for a fatalistic climax and gets the ball rolling for a gut-churning watch. The movie further oscillates between Regha and Shikha’s desperate attempts to survive, in what one of the two documentarians calls it as a ‘Nature vs Nurture’ scenario. Sporadic as they come, Regha and Shikha’s discussions with the documentarians Nikhat Ismail (Shivani Raghuvanshi) and Gundeep Singh Saggar (Imaaduddin Shah) are how we get a peek into their lives. Regha establishes the neck-deep level of misery and poverty she and her half-sister grew up in. Shikha, on the other hand, comes across as a naive product of circumstance who chickened out because there was no food. Despite the kidnappings and killings, which she admits to, she still hopes to walk scot-free. That was the level of her innocence, or at least so it seemed.

By the time you actually get a hang of things, Regha, Shikha and Prajakta are in the middle of a killing spree (not all murders are shown though). Dharmesh Deshpande, Shikha’s father, and Prajakta’s ex-husband enters as a plot twist but doesn’t hold the fort for long. Call her a cleptomaniac or not, Prajakta continues to steal and kill, without batting an eyelid. It’s almost like a way of life for the Deshpande-Sathe mother-daughter trio. And all killings are carried out to extort money, put food on the table and get ahead in the race for survival of the fittest. Any sympathy you try to gather is lost every time you see blood splatter all over like confetti in the air. For the majority of the victims are infants and toddlers. A pattern has begun to repeat until the game ends, very abruptly, for time being.

Prajakta’s comment “Ghar ki baat ghar meinch rakhne ka…” echoes even after she is gone, in Regha’s conscience. Without relying heavily on blasphemy, profanity or even sexual nudity, Regha, Shikha and Prajakta’s account in Posham Pa is equal parts horrid and morbid. With her razor-sharp intensity, Sayani Gupta impresses as Regha, the eldest of the two sisters on death row. She uses the narrative to her advantage and then lets it exploit her, all with impeccable timing. Mahie Gill is outstanding and her performance, a masterpiece. The high-impact close up shots on her blood-smeared face, or while battering a baby offer moments of brilliance.

Ragini Khanna delivers her career-best as Shikha Deshpande. She uses extraordinary restraint to build an air of suspense around her, one which the needle of suspicion can never fall on. She reserves her all for that moment of truth, and we must say, you won’t be disappointed a bit. Posham Pa adopts a sophisticated yet psychological approach, emphasizing on every chill you would shrug off your shoulder and all the heat that builds up after. The climax has the meatiest bite.