In this episode of Qurbaan Hua, Neel and Chahat meet and get into an argument. The goons are about to hit Chahat but Neel comes to save her. 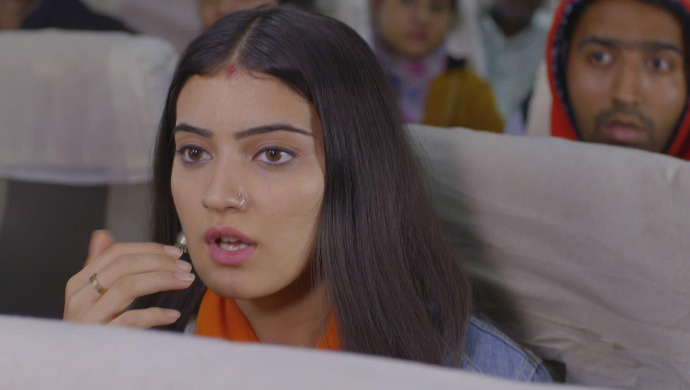 In tonight’s episode of Qurbaan Hua Jamna Prasad Bhatt is a tourist guide in Uttarakhand. He fakes blindness and tells the foreigner that his wife Godambari has taken a vow in front of God and he is now fulfilling her wish. In the next scene, Jamna’s brother-in-law Madhavanand Bhaat aka Vyaasji is a Brahmin in the Shiva temple and performs jyot maha utsav. The people gather around to celebrate the occasion and gossip about Vyaasji’s son Neel who left the place to pursue his career in cooking.

Neel makes a heroic entry into the scene. He sees a woman caught in the fire and breaks the window to save her. Later, he gets to know that there was a shooting going on that he ruined with his entry. Neel tells his friend that he came to Delhi and is happy being a chef in a five-star hotel. He thanked his elder sister Saraswati who helped him to pursue his dream. He gets excited as he says that his sister is going to be a mother after 9 years of marriage. Saraswati’s husband Aalekh Shashtri teaches kids the importance of religion. Neel decides to cook and take sweets to his hometown, especially for the Maha Utsav. He waits for his friend to drop him at the bus stop and suddenly Chahat Baig snatches the bag which is full of sweets. Neel goes behind her and tells her that it is his bag but she does not listen to him.

Neel arrives at the place and sees Chahat and other poor kids having the sweets that he prepared for the puja. He gets into an argument with Chahat for snatching his bag. She tells Neel that there is a racket which is being run by few goons wherein the kids are told to beg and earn money for themselves. She helps the police in arresting the goons but the latter plans to take revenge from her.

Neel catches the bus and gets shocked to find Chahat sitting next to him. The two get into an argument and suddenly the goons stop the bus. They are about to hit Chahat but Neel comes to her rescue and tells them that she is his wife. Will Neel be able to reach the temple on time?

Kumkum Bhagya 26 February 2020 Preview: Ranbir Is Forced To Get Engaged To Maya

Happy Birthday Sriti Jha! A Personal Ode To The Woman Behind The Most Popular TV Character