Neel is in peril at the temple and Chahat reaches there at the right time to save him from Vyasji’s wrath. 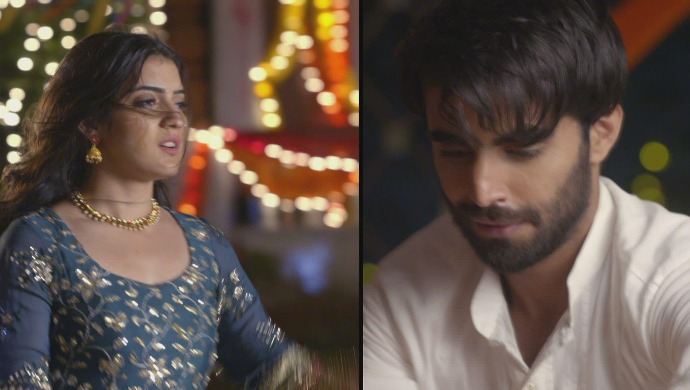 In the previous episode, the goons are about to catch Chahat when Neel states that she is his wife and that they shouldn’t talk to her in a hostile manner. Chahat’s stepmother is introduced, who isn’t particularly fond of her. However, Chahat is unfazed by her behaviour. On the other hand, Neel reaches his place but a little later. His father doesn’t approve of his bad punctuality.

Tonight, Chahat’s stepmother asks her to explain the sindoor and why she is wearing it. Chahat realises it’s because her head bumped against Neel’s and hence, the teeka spread on her forehead too. She explains that it is a mistake and her father forgives her. Raizala’s son and Chahat’s stepbrother, Akram also arrives and on his mother’s signal, throws Chahat’s name tag in the fireplace. Immediately, Chahat’s father reprimands him and tries to retrieve it. However, she asks him to not burn his hands for her because the doctor tag will be with her forever.

Neel manages to reach the pooja on time and visits his father. However, Vyasji denies him from joining the pooja because he hasn’t had a bath yet. To save the father and son from a public conflict, his sister Sanskriti intervenes and asks Neel to have a bath in the Ganges. Neel is half immersed in the water, worshipping God and saying prayers when Chahat arrives at the scene. She notices that his dhoti has flown towards her. Chahat tries to inform him about the same but he doesn’t listen as he is busy with his pooja.

Finally, he opens his eyes and notices that his dhoti has flown away. He also sees Chahat and assumes that this is done by her. They end up in banter and eventually, Chahat gives up and hands him the dhoti. Mr Baig holds a private party in the evening to celebrate Chahat’s MBBS degree. He tells one of the guests that she is aiming to become a gynaecologist. For the party, Chahat wears an ethnic outfit of Zeenat (her mother). Raizala insults her but Mr Baig praises her for keeping his dead wife’s outfit and maintaining it perfectly.

At the temple, Vyasji doesn’t trust that Neel will be able to take care of a diya from burning through the night. He wants to give the duty to Alekh, an outsider. However, Sanskriti convinces their father to give Neel the opportunity. What they don’t know is that the diya has a hole and the ghee is leaking from it. Raizala makes up an emergency and asks Chahat to deliver it. She agrees to do it but her stepmother has actually made up an address that doesn’t exist.

Neel is passing his time at the temple when he notices that there is a hole in the diya. Interestingly, Chahat reaches the footsteps of the temple where Neel is struggling with the diya. Since it is very windy, her dupatta flies away from her neck and falls right on Neel. He decides to use it to cover the diya’s leak.

Why Badlapur Is An Important Lesson In Forgiveness

When Akshay Kumar, Sonam Kapoor Ditched Designers And Labels For Local Shops In…

For more such entertaining content, watch The Chargesheet: Innocent or Guilty?, now streaming on ZEE5.