Qurbaan Hua 28 February 2020 Written Update: Neel And Vyaasji Get Into An Argument

In tonight's episode, Neel and Vyaas ji get into an argument. Saraswati tries to solve the issues but Neel tells her that he will leave soon. 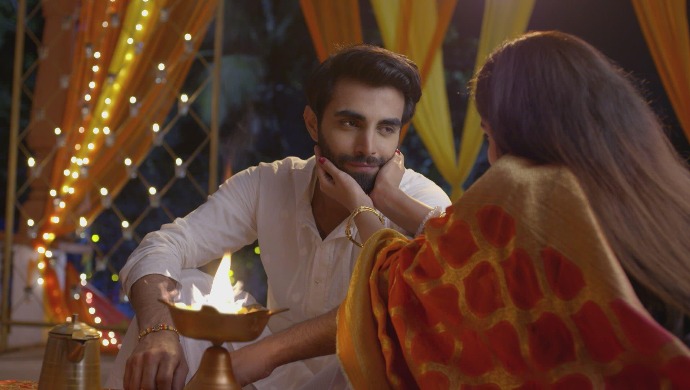 In the previous episode, Chahat explains that the sindoor is a misunderstanding and she hasn’t tied the knot with anyone. Mr Baig believes her and lets it go. Vyasji is upset with Neel and reluctant to let him guard the diya for the night. However, his sister insists that Neel be given a chance as he really wants to show his devotion towards God. Eventually, Neel stays back at the temple to guard the diya. In the middle of the night, Neel observes a hole in the diya which causes the oil to leak. This affects the diya and he worries that it might extinguish. Meanwhile, Chahat’s stepmother asks her to deliver some medicines to an address that doesn’t exist. She reaches the footsteps of the temple and wonders where the house could be when he dupatta flutters in the air and falls right on Neel. He uses it to cover the leak.

In tonight’s episode, Chahat’s dupatta helps Neel from Vyaas ji’s scoldings. Vyaas ji suddenly comes and gets to know that Neel was unable to take care of the jyot and scolds him for his carelessness. Vyaasji tells Neel that he was witnessing everything but the latter screams at his father for seeking happiness from his mistakes. Vyaas ji tells Neel that he can never be a priest like him. Neel gets angry as he says that he does not want to be a priest. Saraswati gets tensed as she gets to know that there is an argument going on between Neel and Vyaas ji. She reaches the temple and sees Neel emotional. Neel tells her that he cannot make Vyaas ji understand his dreams and choices. Neel tells Saraswati that he still remembers the time his mother was on the death bed and Vyaas ji was busy in puja. He tells his sister that he will leave after the Godhbharai function. Chahat reaches home as she gets tensed thinking about her lost dupatta. Gazala starts taunting Chahat for coming home late. Chahat taunts Gazala for keeping her father away from her and warns her. On the other hand, Vyaas ji feels bad knowing that his son Neel hates him. Saraswati tries to change Vyaas ji’s mood. In the morning, Neel prepares for Saraswati’s godh bharai.

Kumkum Bhagya 2 March 2020 Preview: Ranbir And Prachi Are Locked In The Library All Night?