Happy Birthday Radhika Apte! She is not your regular, run-of-the-mill actor. And, her career trajectory, too, is unlike any other 'star.' 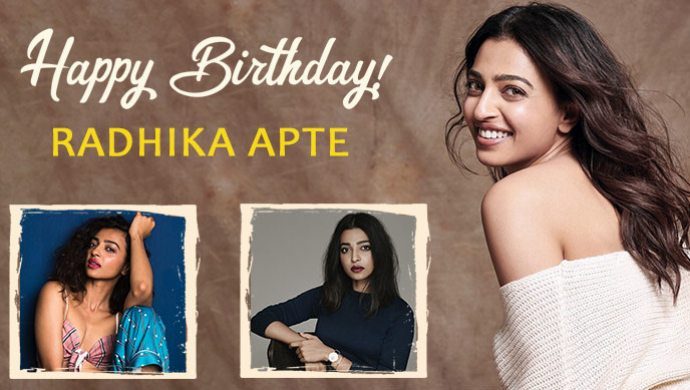 Radhika Apte, who is she? It was what everyone wondered when she rose to fame with her range of roles. She has been pretty much everywhere, every time. The irony was, while Radhika was busy raking in laurels and accolades for her accomplishments, people struggled to put a face to her name. She is not your quintessential actress, after all. Bollywood has always seen two types of actors – the one with a face you cannot forget, the one who immortalize their face with their work. Radhika is a brilliant mix of both. In an industry that only sees things in black and white, she is a shade of grey, the best of both worlds.

We, humans, are irreversibly charmed by what we cannot comprehend, the chase is our thing. Radhika is not the kind of superstar blowing kisses to a legion of fans, strutting down a red carpet with her ribs squeezed in a flouncy ball gown or making you skip a heartbeat in ads. Of course, she does make your heart stop, not with the glamorous looks (albeit she does too) but with her spectacularly flawless and exponentially remarkable body of work that makes you fall for her. Head over heels, truly, madly, deeply, irrevocably kind of love, for her talent. It’s more like the sapiosexual love, we’d say. Radhika is far-far away from the number game, not because she doesn’t have blockbusters under her belt, but because she is the un-starry starlet who refuses to stick to the mould. Radhika, admittedly, doesn’t want to be known as a villain or a heroine but an actor. How else do you explain her career choices, which have always been way ahead of her contemporaries? Take Gayatri in Pad Man for example. How often do you see an actress stand tall in an Akshay Kumar film? She came, she saw, she conquered. Watch the film here to know what we are talking about:

Andhadhun was a class game. A film about a ‘blind man,’ the Sriram Raghavan directorial opened our eyes to brilliance. Guess who played one of the leads in the movie? Radhika. Rajinikanth’s 2016 super-duper hit Kabali is not just remembered for the Thalaivar’s presence but her impeccable inning too.

Radhika, who turns 34 on 7th September 2019,  has never settled for a glamazon role unless it helped take the story forward. Her quest to try something new and take the road less taken led her to be a part of powerful regional flicks including Lai Bhaari, Rupkatha Noy, Postcard and Vetri Selvan. No, you cannot deem it as a case of luck that she has featured in short films, feature films and TV series in seven languages! Her performance as an artist Mehak Deo, who suffers from agoraphobia, in Phobia made the world stand up and take her notice. Parched, too, received rave reviews from the global audience in which she featured as Lajjo who has an abusive husband and seen worthless because she is infertile.

Besides her stellar repertoire, Radhika creates ripples with her bold and staunch stand. Asked for a message to her trollers, “You were highly ignored,” pat came her reply. In her own inimitable style, Radhika has never minced a word and has always set the records straight, be it a question about viral video or marriage. But is that what makes her desirable and dexterous? We think it’s the fact that she is so sure of what she wants to be seen as and doing that it was only a matter of time before banners had her face all over them. Badlapur and Hunterr are proof. She did every intimate scene that came her way with so much sensuality and sensitivity, that she can be, to a great extent, credited for normalizing lovemaking in modern-day films. Who first told you a married woman can have an affair with a student and be confused plus obsessed? What was once seen as a taboo, is now rightfully perceived as an act of emotion. Her first tryst with enchanting her viewers came with a short film by Sujoy Ghosh, Ahalya. It is really surprising and beyond explanation, how she invites you into the narrative, engages you, hooks you and makes you keep coming for more even if for a time span of just 14 minutes.

So, in case you still don’t know what a powerhouse Radhika Apte is, we’d right about now prescribe a binge. But hey, you need not go anywhere because she is omnipresent and very much so on ZEE5 too. Badlapur, Phobia, Pad Man are some of her memorable movies you can watch to know how she is changing norms, one film at a time.

It’s time you get over the memes already and get used to seeing her four or perhaps five times a year, not in a role she has done before. She is just that good, what can we say!

Happy Birthday, you force of nature. Catch the best of Radhika Apte Movies like Phobia, Badlapur, Pad Man and more only on ZEE5.

P.S. She recently bagged an Emmy nomination in the best performance by an actress category with Jenna Coleman for ‘The Cry’, Marjorie Estiano for Brazil’s ‘Sob Pressao 2’ and Marina Gera for Hungary’s ‘Orok Tel’.

Ishq Subhan Allah: Kabir Takes Zara To Mumbai For The Finals Against His Father's Wishes