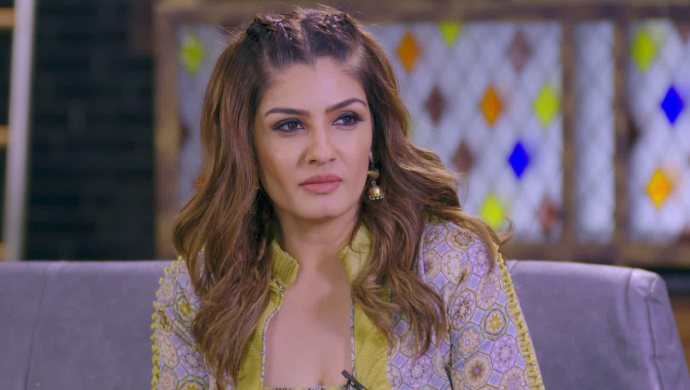 “I am very lazy,” claims Raveena Tandon on the latest episode of ZEE5 show Not Just Supper Stars. The 90s superstar ruled the hearts of millions and continues to give the younger generation a run for their money even today. Celebrated designer Rocky S, who has been a friend of hers for nearly 25 years now, joins her on the show they both spell out their food preferences, anecdotes from the past and more.

Raveena has immortalized several chartbuster songs with her sizzling moves, some of which were recently reprised too. Speaking about her classic evergreen tracks, she spilled, “At that point when we were making the film, we had thought Tu Cheez Badi Hai Mast Mast would become the cult song, which it did. But over the years, in today’s time, Tip Tip Barsa Paani has taken over.”

Raveena and Rocky both, opine that sensuality is not about skin show. “Sensuality is not only about shedding your clothes. If you want to be sensuous, you can be in a saree, you can be in anything you wear. It’s how the outfit is designed. If you see the yellow saree, it was a normal yellow saree. We didn’t do a topless thing, we didn’t do a skin show. It was heavily lined so even in the rain sequence, there was no skin show. It was just the way Rocky had designed it,” Raveena told host Gunjan Utreja while touching upon the iconic yellow saree from Mohra.

Rocky made three startling revelations about his close friend, “Raveena started the makhana trend. Today everyone is eating makhanas, but 20 years back this madam would munch on a box full of makhanas. Nobody knows about that I think. She is extremely extremely friendly with everyone. She is not a dresser, she loves to be easy all the time. If you give her a kurta-pajama, she will be happy to wear it.”

The Sandwich star also shared that she loves to travel to places that hold historical importance, “I like to try local cuisines. I love historical places. This is a habit I have tried to inculcate in my kids as well, to visit historical places.”

After indulging in a delicious dish prepared by Chef Junaid, the two bid goodbye with exciting gift hampers. Watch the full episode here to know more:

Tip Tip Barsa Paani or Tu Cheez Badi Hai Mast Mast – which is your favourite Raveena Tandon number? Tell us in the comments box below.

Broken But Beautiful Season 2 Trailer: Veer And Sameera's Story After Happily Ever After