This is a heartwarming and beautiful rom-com that will teach us about goodness and love, even in these difficult times. Watch this show on ZEE5. 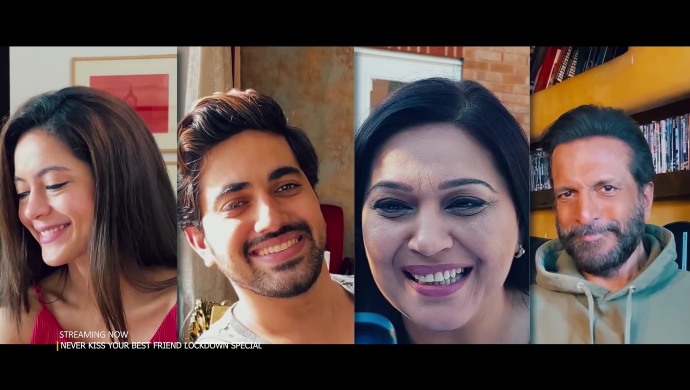 Never Kiss Your Best Friend has been a roller coaster ride ever since it began, showing us the reality of how it feels like to date someone in this day and time. It has been an eye-opener. We’ve always seen love stories between two best friends turning into marriage, and expected that is the reality. But this series has shown us that marriages don’t just happen, especially since you’re best friends. There’s a lot at stake, your friendship being the most sacred. We saw a realistic and apt end to a just as realistic show. The credit for this highly relatable romantic drama goes to its writer Sumrit Shahi, director Arif Khan, producers Sarita A. Tanwar and Niraj Kothari, and the very talented cast and crew. After the huge success of its first season, they’ve now come up with a lockdown special. Anya Singh and Niki Walia have reprises their roles from the first season, while we have two refreshing additions. Javed Jaffrey and Zain Imam have joined the cast to play the roles of Bitto mama and Zayed, respectively. These new additions have not only taken the story forward, they’ve made it more appealing with their effortless, stellar performances.

You can watch the promo here:

Tanie has been through hell and back ever since she broke up with Sumer. She lost her best friend and her love, all at once. The breakup also impacted her followers on social media, and she has no idea how to gain them back. To add to all this, she’s also home quarantined during the lockdown. Since all else has failed, she’s turned to online dating to find someone and ends up connecting with Zayed, her first love and old best friend. Tanie and he had not been in touch for a long time, but now that they are, they still feel the sparks. They even end up fake dating! Will it turn into actual dating? Will these best friends kiss each other too? Well, you have to watch the show

Tanie and Zain have been going strong throughout the lockdown, catching up on old times and supporting each other through the tough ones. It felt as if there were many things unsaid, that seem to peek during every intimate conversation they shared. Lockdown can be a difficult time, with the world being on pause while it’s just the two talking. The increasing emotional proximity has made them question their relationship, and the show’s last episode gets them to finally open up and face them. How would their relationship go from here on, after the revelation?

The series was shot during the lockdown at each actor’s home. Even then, the cast and crew managed to put together such an amazing and refreshing new story. Javed Jaafrey has proven to be perfect in his role as Bittoo mama, with just the right amount of fun and emotions thanks to his acting prowess. Although Niki Walia returned in this season with the same role, she admirably depicts the improved relationship between her character and Tanie. Her constant bickering with Bitto mama was hilarious and relatable as we find ourselves reminiscing about our own similar quarrels with our siblings. Anya Singh and Zain Imam have played the roles of Tanie and Zayed brilliantly, making us connect with them, hoping that they find their love. All in all, this season has taken its predecessor a step ahead in terms of storyline and entertainment. It will give you a warm fuzzy feeling throughout.

For similar shows, you can watch Zee5

Strawberry Shake: Sumeet Raghvan And Hruta Durgule Get Candid In This Exclusive…

Svah! So Be It Review: A Taboo-Breaking Short Film Of The Before And After Of…

Yaar Da Punch: Rajkummar Rao-Patralekha Believe 'Together They Are Way Too Stronger'