Ruchi, who plays Disha on Zee TV show Kumkum Bhagya, recently gave cute nicknames for her co-stars as per their personality. 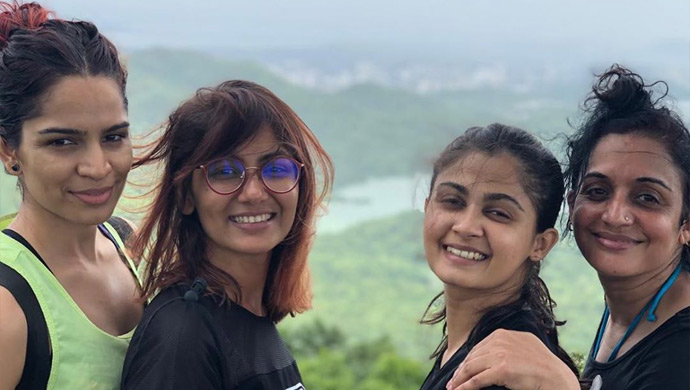 Ekta Kapoor-bankrolled Kumkum Bhagya is one of the leading television shows. The daily soap often tops the BARC ratings and rakes in high TRPs. In the course of its five-year-run, Shabir Ahluwalia and Sriti Jha’s chemistry as Abhi and Pragya on the serial has attracted love and attention from fans all over the world. Even with the introduction of new stars like Ruchi Savarn, Ashlesha Savant, Krishna Kaul, Mugdha Chaphekar, Naina Singh and others, the show has been faring well. In fact, fans not only love their onscreen camaraderie but equally appreciate their offscreen bonding. Recently, Sriti along with Ruchi, Ashlesha, Mugdha, Shabir, his wife Kanchi Kaul and others enjoyed an adventurous Sunday at Mumbai’s Sanjay Gandhi National Park. Pictures of the Kumkum Bhagya star cast’s monsoon weekend have been going viral. But it was Ruchi’s Instagram stories that caught our eye especially.

Ruchi, who is seen as Purab’s estranged wife Disha on Kumkum Bhagya, shared photos from the team outing just like the rest of the celebrities. However, she made it extra special by giving cute nicknames for her co-stars, and that too according to their personality. In case you missed her Instagram stories, check out what she nicknamed them all here:

Posting this super adorable picture of Sriti, Ruchi wrote ‘humara chashme wala bhanwara..this girl ain’t stopping.’ We totally agree because every time we check Sriti’s Instagram, she is off to a new location, exploring the world.

2. Ashlesha Savant is ‘hot and wild’

There is no denying that Ashlesha’s style file as Meera on Kumkum Bhagya are definitely making waves. I mean, just check them out here if you don’t believe us. This picture of her resting in the middle of a lush green jungle is so apt, Ruchi.

3. Shikha Singh, the ‘lost and surrendered’

Staring into the wild, Shikha is soaking in the beauty of the surroundings in this photograph. These captions are making us wonder if Ruchi is writer for they are all so perfectly put.

Going by this description, one can assume that Suwati took to the wild terrains like a pro and was able to trek smoothly. Right, Ruchi?

5. Do you recognize these ‘Pyaare bachche?’

Aparna Mishra, seen as Shahana, and Richa Rathore, who essays Mitali and Raj’s daughter, are rightfully nicknamed as ‘pyaare bachche,’ by Disha. These girls are after all the screen kids of some of these troopers.

Although Ruchi didn’t post anything for Shabir (or maybe we missed?), Ashlesha called him the super trooper.

We must say, these pictures are making us look forward to their next outing! Sriti, make it happen soon.

Do you agree with Ruchi’s captions/nicknames for her co-stars? What would you nickname them if you had to? Tell us in the comments box below.