Actor Arjun Kapoor visited the show to promote his upcoming film India's Most Wanted. The episodes of 18-19 May 2019 were a Jatin-Lalit special. 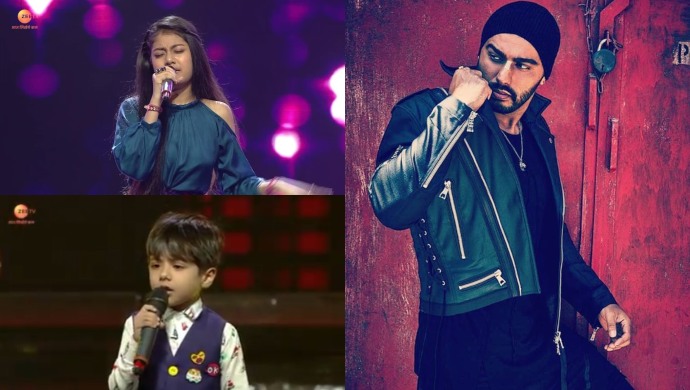 With blockbuster hits like Ishqzaade, 2 States, Half Girlfriend, and Namaste England in his kitty, there is no doubt that actor Arjun Kapoor is talent se bharpur. The ‘most wanted munda’ amongst a current lot of stars was the recent guest to visit Sa Re Ga Ma Pa Li’l Champs 2019. He made an appearance to promote his upcoming film India’s Most Wanted. This weekend, on 18-19 May 2019 episodes, the contestant sang evergreen and chartbuster hits of music duo Jatin-Lalit. Veteran actor and filmmaker Satish Kaushik also marked his presence, encouraging the little champs on the Zee TV singing reality show.

From Shah Rukh Khan’s DDLJ to Aamir Khan‘s Ghulam, our champs covered every memorable number from some of the greatest all-time Bollywood hit films. Without further ado, let’s take a look at some of the best performances that wowed the judges, guests and mentors alike.

As we have earlier mentioned, this cute girl is the nightingale of the show. She lent her melodious voice to a Rani Mukerji and Saif Ali Khan’s sensuous song which earned her heaps of praises from music maestro Lalit Pandit. Check out her performance above.

Satish Kaushik slipped under the skin of his iconic character Pappu Pager while Mohammed Faiz enacted a Gully Rangeela – needless to mention the latter gave our very own ‘Calendar’ a tough fight! His performance was all the more enchanting, thereby continuing his triumphant inning on the show.

We are literally falling short of words every week to describe this volcano of a talent! No Bollywood celebrity who has been on the show till date has been able to resist his charm. Arjun was no exception for he said some endearing words for our munchkin here.

Those complaining that they haven’t seen the best of Anushka Patra in weeks, she just granted your wish. She sang a chartbuster starring Shah Rukh and Kajol. We’d let you check her performance out and decide for yourself what you feel about it.

Let us know which was your favourite performance from this weekend’s episodes of Sa Re Ga Ma Pa Li’l Champs 2019 in the comments box below.