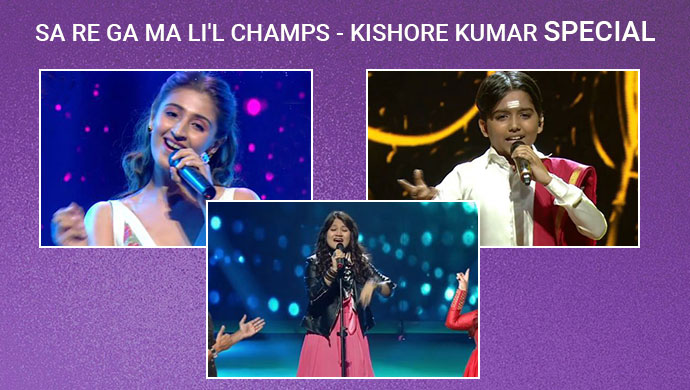 Bappi Da was joined by Amit Kumar, son of singer and actor Kishore Kumar. The playback singer even spilled interesting trivia about his late father’s song Roop Tera Mastana. He revealed that the song was initially recorded in a Bhatiyali style tune, in one take. However, later Kishore Kumar recalled a tune by S.D. Burman and used that for the Rajesh Khanna, Sharmila Tagore-starrer song from the film Aradhana (1969).

As for Leja Re singer Dhvani Bhanushali, her performance with the talented kids on her famous tracks made for one of the major highlights of the weekend. Check it out here:

I had a blast singing & dancing with these super talented kids at #SRGMPLilChamps. Tune in to @zeetv and watch the full episode this weekend💃🎶

Moving on to the performances by little champs, take a look at few of the best ones here:

Wonderboy Faiz is in the habit of leaving us spellbound with her performance. Repeating the same, the young boy left everyone in awe of him with his rendition of Ek Chatur Naar. He was even dressed as Mehmood.

Known for her power-packed performances, Aastha delivered a hit this time too. Putting her hard-hitting notes to best use, she performed her version of Roop Tera Mastana song. Amit Kumar was bowled over by her performance!

To say that Bhavish delivered a smashing performance on Amitabh Bachchan’s song De De Pyaar De would be a titanic of an understatement. The young chap gave his brilliant musical best and wowed the jury and judges alike.

The nightingale of the show, Sugandha Date, crooned Tere Bina Zindagi Se Koi for the Kishore Kumar Special episode. Needless to mention, her performance was melodious as ever!

Which of these performances did you like the most? Let us know in the comments box below.

Watch Sa Re Ga Ma Pa Li’l Champs 2019 for free on ZEE5 every weekend and never miss any of your favourite contestant’s performances.

Having Them Monday Blues? We Recommend A Popcorn Bucket With Ranveer Singh's Film Simmba To Beat Them!