In the Real Heroes Special episode, our champs sure did spread lots of smiles and laughs as their performances tugged at our heartstrings! 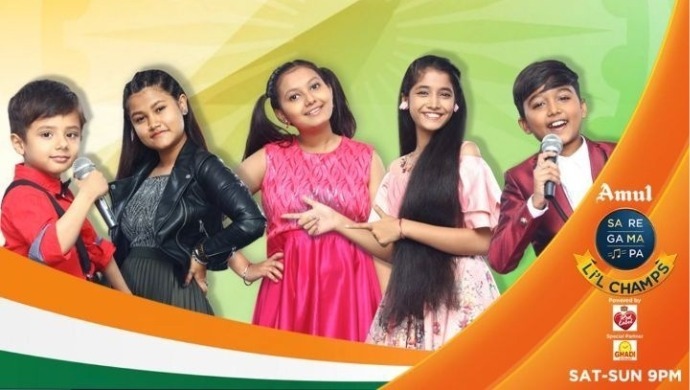 A month after it went on air, Zee TV’s music reality show Sa Re Ga Ma Pa Li’l Champs 2019 has hands down become one of the most watched shows on Indian television! It ain’t easy to resist the soul-stirring performances by young contestants who are far-far ahead of their age when it comes to setting the stage on fire! A couple of weeks ago, the team of Luka Chuppi including Kartik Aaryan and Kriti Sanon visited the show and were left spellbound for the dhamakedar deliveries by our champs! Last Saturday and Sunday, the episodes were dedicated to the real heroes of our nation – the Indian soldiers.

Putting their best musical foot forward, the participants paid a musical tribute to the Bravehearts of our country. Check out a glimpse here in case you missed it:

Be it the cutie-patootie Swaransh or the 9-year-old Aavya, each kid left no stone unturned in delivering their very best! Don’t believe us? Sample these some of the best performances that were the highlight of the week:

Putting her powerful notes to the best use, Aastha went for a high-octane number by maestro A.R. Rahman, Jai Ho. If we were to best describe her performance in one word, it’d be – TERRIFIC.

Spot on sur and some heartwarming singing by Bhavish! Watch him sing his way to everyone's hearts tonight, in the Real Hero Special episode of #SRGMPLilChamps, Sat-Sun, 9 PM. @singer_shaan @richasharmaofficial @amaal_mallik @ravidubey2312 #MusicSeBadhengeHum

Coach Kabir Khan in Chak De! India returns to hockey with the last ray of hope of turning his dark loss into a shining victory, and boy, didn’t Bhavish’s spot on sur do complete justice? His heartwarming performance found a spot straight in our hearts!

Borrowing another song from the Shah Rukh Khan-starrer film, Aavya put up a brilliant show! She left everyone stunned with her perfect notes as she crooned Badal Pe Paon Hai song. The girl killed it if you ask us!

Our chota packet, bada dhamaka aka Swaransh gave quite a touching performance on Nanha Munna Rahi Hoon. Don’t miss his salute to the real heroes in the latest episodes!

Our Real Heroes are in love with Pritam’s energetic performance! Our Champs are ready to spread a lot of smiles, tonight in the Real Hero Special episode of #SRGMPLilChamps, Sat-Sun, 9 PM @singer_shaan @richasharmaofficial @amaal_mallik @ravidubey2312 #MusicSeBadhengeHum

Nepal’s finest export, Pritam does it again! A performance so energetic even the judges couldn’t help but hum along with the boy. He outdid himself and others with as he crooned the title track of Rang De Basanti.

In the Real Heroes Special episode, our champs sure did spread lots of smiles and laughs as their performances tugged at our heartstrings! The episodes also saw judge Amaal Malik’s father Daboo Malik make a special appearance leaving the musician emotional! Besides, there were jawaans from the Armed Forces sharing their special message too!

Did You Know Kunal Kemmu-Starrer ZEE5 Original Abhay Is Based On Real Crime Events?