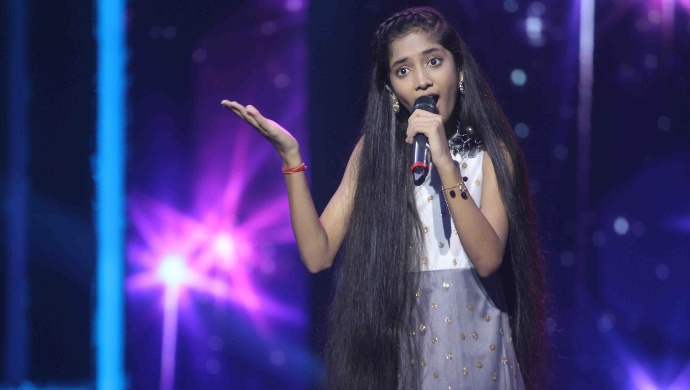 Post her win, Sugandha spoke exclusively to us about her journey on Sa Re Ga Ma Pa Li’l Champs, a career in playback singing and more. Here are the edited excerpts from the conversation.

1. How does it feel to win the honour?

I feel very blessed and lucky. I have won such a huge reality show. Months of preparation and hard work finally paid off; my parents, my brother, everyone around me is overjoyed. The happiness of making my Guru Ji Anand Sharma Sir proud, however, comes before the excitement of winning Sa Re Ga Ma Pa Li’l Champs 2019.

2. Did you expect to win the show?

Not at all. Getting through the auditions, eliminations, top 16, I only felt like going forward. I always strived to reach the finals but never was I sure of winning the show. Having said that, I always was persistent that I have to win!

3. When did you first realise that music was your calling?

I was six when my mother first introduced me to music. She holds a Masters in Arts degree in music, and thus, would teach me a few songs. That’s how my interest was sparked. On a trial basis, my mother took me to audition for Indian Idol Junior in 2013. It was just a trial, and there was no proper planning. But it was after I made it to the top five in the reality show that I realized music is my calling. Thereafter, my parents decided to move to Mumbai for me to get proper training. That’s when I started training under my guru Anand Sharma. Although he doesn’t train, he accepted me as his student on the basis of my talent and teaches me for free. I met Anand Sir on Indian Idol, he was a music coach there and now on Sa Re Ga Ma Pa Li’l Champs too.

4. Was it difficult to handle the pressure of a reality show?

I was very small when I had participated in Indian Idol Junior. I was like Swaransh Tiwari, very young to understand everything that was happening around. The experience, however, helped me a lot during Sa Re Ga Ma Pa Li’l Champs. We had a lot of fun!

5. What is your biggest learning from Sa Re Ga Ma Pa Li’l Champs?

I had a lot of masti during all these months on Sa Re Ga Ma Pa Li’l Champs. I enjoyed a lot of happy moments but at the same time, there were sad moments too. I faced several challenges including my throat issues at times but everyone on the show encouraged me a lot. My parents, my friends, Ravi (Dubey) Bhaiyya, Anand Sir, they all supported me in my journey. Anand Sir has been my backbone throughout the journey. I have learnt from the show that confidence is everything if you are confident you can overcome every situation.

6. You used to be called ‘gundi’ on the show. You seem very silent on the exterior though.

(Laughs) Yes, I had a lot of fun on the show! Throughout the show, all of us contestants used to do so much of masti off-camera. During the rehearsals, I had a lot of masti with the band, Swaransh who has become like my younger brother now. Lekin sabse jyada masti maine kisi ke saath ki hogi pure season mein, wo hai band ke saath. I know them since Indian Idol Junior days, so it was a different experience.

7. You have lent your voice for Priyanka Chopra in Jai Gangajal, you have also sung the IPL 2016 theme song. What made you return to a reality show then?

A reality show is a good platform to reach the masses. It’s on you how you take it. Whether you take it as a competition you want to win or a learning experience. I wouldn’t have felt disappointed had I not won the show, because I would be leaving with a lot of lessons and memories. Besides, it had been five years since I took part in any show. I was comparatively raw when I had participated in the 2013 show, but now I have taken training for five years, so it felt right.

8. After Priyanka, which actress would you like to do playback singing for?

Personally, I really like Deepika Padukone, Alia Bhatt and Priyanka Chopra. There is still a long way to go before I start playback singing, I have to learn a lot. But yes, if given a chance to sing for any of these three actresses, I’d be happy to do so.

9. How do you balance studies and your passion?

I am very much interested in academics and pass my examinations with good grades. I balance my studies and music very well, but I have to clear my matriculation so I shall focus on that too. Sometimes, I do think of going abroad and pursuing a course in music. However, right now, I am only concentrating on my 10th board exams and then shall figure out the way ahead. Both music and academics are important.

10. Whose music/songs you listen to the most – Bollywood and international?

I listen to all genres of music, I love to try singing them all too. Personally, I enjoy melodious compositions. I consider Lata Mangeshkar Ji as my idol and learn from her songs. I also consider Anand Sir as my idol. Besides, I like to listen to Shreya Ghoshal, Sunidhi Chauhan, Arijit Singh and others.

I also listen to western music – One Direction, Bruno Mars, Taylor Swift and Adele are some of my favourites.

11. Tell us your favourite performance of yourself from Sa Re Ga Ma Pa Li’l Champs.

I really love 90s and 80s songs, the compositions of Shankar-Ehsaan-Loy, Jatin-Lalit. My favourite performance from the show are quite many, namely Morni, Luka Chupi, Hum Dil De Chuke Sanam.

You can always binge-watch and catch up performances on Sa Re Ga Ma Pa Li’l Champs anytime anywhere only on ZEE5!