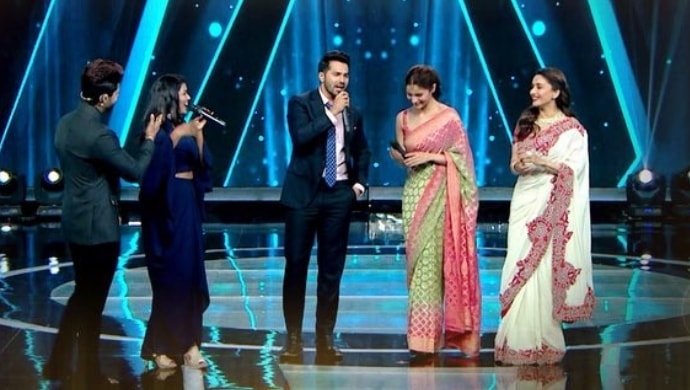 Week after week contestants on Sa Re Ga Ma Pa Li’l Champs have been impressing the audience with their power-packed performances. The Zee TV singing reality show is in its seventh season this year, and the theme for the current season is Music Se Badhenge Hum. This nationwide talent hunt for budding singers definitely has us hooked with their soulful renditions. The star cast of Kalank – Varun Dhawan, Alia Bhatt and Madhuri Dixit Nene were the latest guests on Sa Re Ga Ma Pa Li’l Champs 2019 this weekend.

The Hum Aapke Hai Koun actress was a vision in a white and red saree. Alia, on the other hand, looked ethereal in an embellished saree. Minimal makeup and a maang tikka cast a fatal charm admittedly. As for Badlapur actor Varun, he slipped into a blue and white blazer suit for a dapper look. Besides stunning performances by our little champs, Madhuri’s performance on Tabaah Ho Gaye song was a lethal attack on our mortal selves. Without further ado, check out Madhuri’s performance here:

Another highlight was Varun dancing to his Kalank number First Class, like the dancing hero he is! Check out some of the dazzling performances from the episodes here:

Little Swaransh Tiwari found his way into VD’s heart with his rendition of Govinda’s song Main Toh Raste Se Ja Raha Tha. So much so that Varun even performed on the chartbuster with Alia. Watch their sizzling chemistry and Swaransh’s soulful performance here:

The nightingale of the reality show strikes again! Not only did she left the stars of Kalank mesmerised as she crooned Ghar More Pardesiya, Madhuri even took a trip down the memory lane. She recalled a previous performance of Sugandha, when she had visited the show with Total Dhamaal stars. Bowled over by her soulful voice, the Dhak Dhak girl made Sugandha revisit her performance for Varun and Alia. Check both the performances here:

Ritik is in the habit of making heads turn his way! The wonder boy sung Teri Chunariya song and of course, his notes left us all in awe of him a little more.

Give your favourite champ a big shoutout in the comments box below. If you have watched Kalank, don’t forget to tell us your views of the film.