Save The Date: REJCTX, Barot House, Posham Pa To Release On ZEE5 This August 2019

Check out the list of premium content to watch on ZEE5 in August and block your calendars for a power-packed entertainment dose! 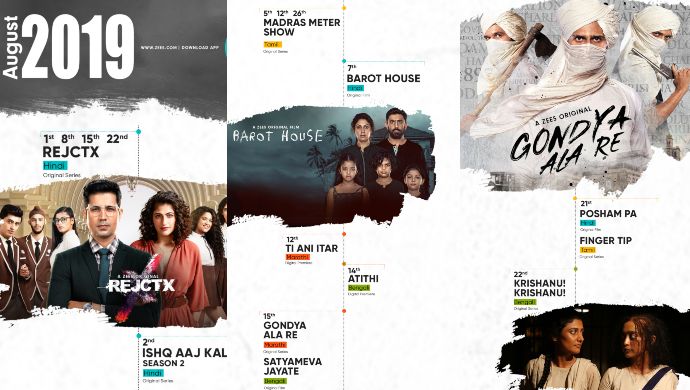 India’s fastest growing OTT platform ZEE5 is churning out a mixed bag of content and an impressive lineup of films and series for fans to binge-watch every month. After treating us to a first-of-its-kind digital drama Ishq Aaj Kal, the platform shall return with a season two of the Ishq Subhan Allah spin-off in August. Besides, the story Goldie Behl’s ambitious project REJCTX further unfolds this month while Amit Sadh-Manjari Fadnnis’s ZEE5 Original film Barot House will send chills down your spine. We also have an Independence Day offering for Marathi audience, Gondya Aala re.

Goldie Behl presents a fresh story of misfits in a musical mystery thriller REJCTX, against a rap backdrop. Driving solely on relatability, the web series stars internet bigwigs Sumeet Vyas and Kubbra Sait in a new light besides seven youngsters. It follows the story of Indian students in a Singapore residential school, and the challenges they face as teenagers. The first two episodes of REJCTX are already out, you can read our review here. The second set of episodes of the ten-part series releases on 1, 8, 15 and 22 August respectively.

For those who have been basking in the suspense of Ishq Aaj Kal, season two is already on its way for you all. The digital drama revolves around Aaliya, played by Ankitta Sharma, who is looking for her father. She comes from the family of Ishq Subhan Allah’s Kabeer and Zara. Actors Angad Hasija, Paras Kalnawat, Puneett Chouksey, Kavita Ghai shall play key roles in the coming season. Watch the trailer of Ishq Aaj Kal season 2 here:

Barot House marks Amit Sadh’s first suspense drama. Last seen in Super 30, the 36-year-old actor plays a deranged father to three kids while Manjari Fadnnis essays his wife. Shot in Daman, Gujarat, the Bhargava ‘Bugs’ Krishna directorial is based on true incidents. Threat enters your home on August 7. Meanwhile, Gondya Aala Re is a Marathi original series set to release on 15 August on the platform. It begins an untold chapter of bravery against British Raj.

Apart from the web series, ZEE5 has a list of original regional movies lined up. Bengali film Atithi will have its digital premiere on 14 August while Satyameva Jayate is an original Bengali film releasing the very next day on ZEE5. Krishanu! Krishanu! is another treat towards the month-end. For Tamil viewers, episodes of Madras Meter Show will be out on 5, 12 and 26 August respectively. There is also an original web series Finger Tip scheduled to release 21 August.

Posham Pa, a ZEE5 Original film will stream on the platform 21 August onwards. The film starring Mahie Gill, Ragini Khanna, and Sayani Gupta narrates the story of India’s first female death row convicts. Movie buffs can cheer up as  Ti Ani Itar and The Tashkent Files are two movies set to have their digital premiers this month.

Stay tuned for all this more of your favourite TV content available on ZEE5. Watch the latest episodes of Aghori and Hamari Bahu Silk, the latest television shows on ZEE5.

5 Scenes Of Rajkummar Rao From Bareilly Ki Barfi That Made Us Go, "Baaja Phad Diya Tum!"