Based on India's 1976 drive of forced sterilization, Shukranu is an upcoming ZEE5 Original film with the tagline - 'Hui Emotion ki Nasbandi.' 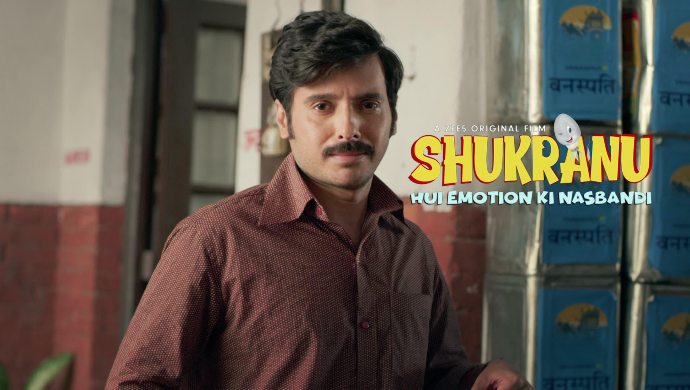 Divyenndu Sharma is set to appear in yet another satire, as he plays the lead in upcoming ZEE5 Original Shukranu. Based on India’s 1976 forced sterilization drive during the emergency period, the film carries the tagline – ‘Hui Emotion ki Nasbandi.’ In Shukranu, he essays the plight of a man named Inder. Since sterilization was a mandate and not a choice back then, Inder ke #PyaarKiKatiPatang.

The teaser of Shukranu was released on ZEE5 recently. Set in 1975, the video begins with a voice-over from actor Vijay Raaz speaking as ‘shukranu’ aka sperm. Raaz explains that India is on the path to progress but after ‘parmanu’ meaning atom and ‘keetanu’ meaning germs, the biggest problem facing the country is ‘shukranu’ aka sperm. A forced sterilization drive is shown wherein men are forcefully dragged onto a bus and taken to a hospital. Inder, the protagonist of the story, is one of them. After the sterilization procedure, every man gets a box of ‘falta, fulta tel’ and some money. The clip ends on the note – khatre mein hai har shukranu (every sperm is in danger)!

Watch the promo of Shukranu here:

Shukranu essentially follows a series of events Inder has to deal with how his marital life, love life and peace of mind were affected owing to the situation. The script is perfectly punctuated with situational comedy. Besides Divyenndu, the film also stars Shweta Basu Prasad and Sheetal Thakur. Directed by national award-winning Bishnu Dev Halder, Shukranu is the debut digital film produced by Reliance Entertainment.

Shukranu is Divyenndu’s second outing with ZEE5 after Badnaam Gali, which was based on the concept of surrogacy and motherhood. Speaking about the same, he said, “We have already started shooting the film. My character Inder goes through a lot of emotions as a result of forced sterilization which makes it a challenge to play as we want it to be sensitive and entertaining. This film will mark my second outing with ZEE5 after the award-winning Badnaam Gali and I am looking for a fruitful associate once again!”

Shukranu starts streaming on ZEE5 14 February 2020 onwards. Stay tuned for more updates about Shukranu. Are you excited to watch the film?

The Chargesheet: Who Killed Shiraz Malik? 7 Conspiracy Theories Around His Death