Sonchiriya Review: Sushant-Bhumi’s Film Is Unlike Any Dacoit Drama You’ve Seen Before

Sonchiriya is set in the 1970s Chambal ridden with castesim, patriarchy deeply rooted in its states, something that the previous dacoit dramas lacked. 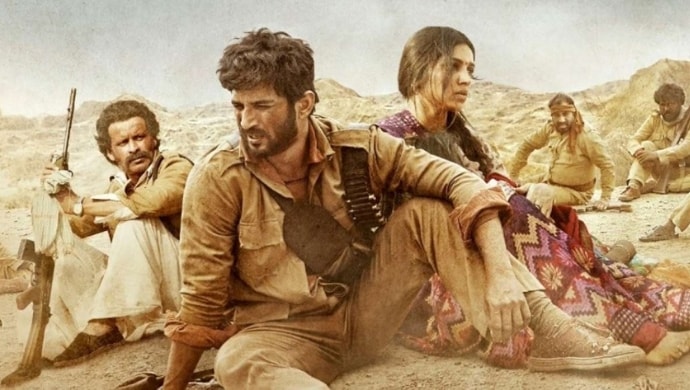 Cinema in India, especially the Hindi industry, are chock-full with stories of the esteemed Chambal valley. However, all those films sing legends of a Robin Hood saving the day from the blood and revenge-thirsty dacoits and bandits. Director Abhishek Chaubey offers salvation in Sonchiriya, from this time-worn and much predictable concept wherein fate of the dacoits is pre-sealed.

Sonchiriya is set in the 1970s Chambal ridden with castesim, patriarchy deeply rooted in its states, something that the previous dacoit dramas lacked so far. But the dust-laden canyon of Chambal towered above every discrimination as a ‘Baaghi’s dharma’ ruled out everything under the leadership of Man Singh aka Dadda (Manoj Bajpayee).

Virender Singh Gujjar (Ashutosh Rana), a police inspector, is baying for the blood of Man Singh and his gang. 25 minutes into the film, Dadda faces a tragic death in a shootout with the cops. It is 1975, so is established by the breaking radio signals announcing Indira Gandhi’s declaration of the Emergency. Bhumi Pednekar plays Indumati Tomar, a fierce Thakur woman, who murders her father-in-law after he rapes their servant’s daughter Sonchiriya.

Indu seeks refuge and shelter with the outlaws, but they are split over accepting an ‘untouchable’ child. New Sardar Vakil Singh (Ranvir Shorey) opines that Indu and the child be handed over for it is a ‘family problem.’ Lakhna (Sushant Singh Rajput) argues that it is a matter of justice. The brigands split into two groups with distinct beliefs over Indu and Sonchiriya. The fallout also marks the beginning of a cat and mouse chase game. Vakil teams with Indumati’s family, except her husband who holds onto his ‘humaneness.’

Director Chaubey has an eminent history of dealing with grey characters who end up on the wrong side of the law – sample Ishqiya, Dedh Ishqiya, Udta Punjab. In Sonchiriya, this narrative is backed by a stellar star cast and a grasping script by Sudip Sharma. He throws a Vishal Bhardwaj score in the mix with birds-eye shots of the river and ravine.

Relationships are not even in the sub-theme of Sonchiriya. It is a journey of redemption and self-discovery. Sushant’s character has the most gripping arc for he finds himself in a catch twenty-two situation more than just once. It can be credited to the accidental killing of innocent children and the haunting image of a bloodstained five-year-old girl.

The cast has done a phenomenal job. Manoj as the ganglord, Ranvir as the short-tempered deputy, Sushant as the wise dacoit, Bhumi as a resilient Indumati braving the bad world to save a child are all scintillating. Also stealing the thunder and causing ripples in the plot is Indumati’s teenaged son who is ready to shoot his mother.

Sonchiriya, briefly, mentions of Phuliya – no points for guessing who she resembles Phoolan Devi. Phuliya leads a gang of lower-caste community men with a similar life story of Sonchiriya. However, she only melts after Lakhna ‘gifts’ her the upper-caste men who had raped her. Phuliya offers Indumati to join her troop. It is in this moment that Abhishek cements our belief that his characters are each a golden bird – their journeys both haunting and doomed.

Let us know what you think of the movie in the comments box below.

Are you a Sushant Singh Rajput fan? Don’t forget to watch his 2018 hit Kedarnath, now streaming on ZEE5.

Dance India Dance 2019 Auditions: Here's How You Can Register Online