Popular Marathi star, Spruha Joshi, shares her excitement after Rangbaaz Phirse, her first project in Hindi, became the 'Most Viewed Series' on ZEE5. 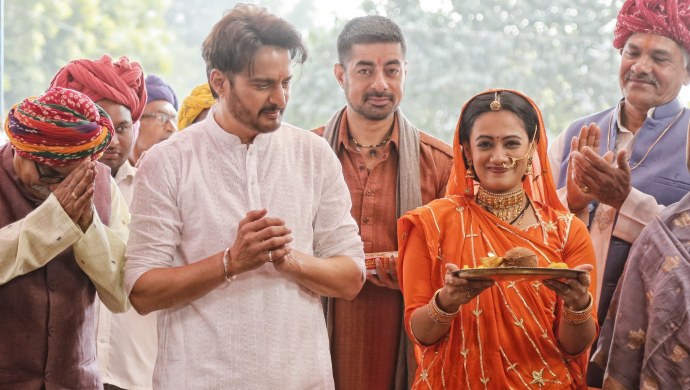 Spruha Joshi started her career as a child actor with Maai Baap and then went on to establish her name in Marathi cinema with movies like ‘A Paying Ghost‘, ‘Lost and Found‘ along with major roles in popular TV shows. She made her first foray into Hindi content with Rangbaaz Phirse. When the show won the award for most viewed original series on ZEE5 in December, Spruha Joshi showed up along with Gul Panag and director Sachin Pathak to collect the award. We sat down down for a quick chat with her about her experience on Rangbaaz Phirse and the early reactions about the show.

1. Is this the first award for Rangbaaz Phirse? How does it feel knowing that the award is purely based on audience reactions?

Yes, it is the first award and it’s great to get it within 20 days of the show’s release. It is even more special because this is only based on the audience’s reaction to the show, so it’s a real award. It feels wonderful.

2. What are the early reactions to the show that you received?

When I read the script the first thing that hit me was the emotional connect is really high on the show. I had the same feelings while shooting for the show as well. I think even the audiences caught on to the emotions and the message of the show. People would message me saying that the show made them cry.

3. Did you also feel any pressure working on the show as it already carries a legacy?

There is no pressure as such because this is a whole new story. So there are only the expectations to match the earlier seasons’ numbers and do better, but story-wise there is no pressure about taking the characters forward. Also, the series is not resting entirely on my shoulders. It features Jimmy (Sheirgill), Sharad Kelkar, Sushant Singh, Harsh Chhaya and Zeeshan. All of these are such great actors I never felt any pressure that the show relies on me.

4. What was it like working with Jimmy Sheirgill on set? We heard you’ve had a long-time crush on him.

Well, I’ve had a crush on Jimmy ever since I saw Yahaan. Not many people have seen it, but I loved that movie. I’ve watched every film of his in the theatre and he is like Salman Khan to me. He didn’t know about any of this while we were shooting together though. I still think he doesn’t know about it.

Watch a sneak-peek of her chemistry with Jimmy Sheirgill here.

5. You also mentioned that working with such good actors took the pressure off you. How was the bonding like on set between you and the other stars?

Most of my scenes are with Jimmy, I was terrified to be with him first but he is so nice and humble I became immediately comfortable. Also, I hung out with other actors because I just liked being on set, even when I had nothing to do. I used to just sit there and watch how different actors approach every scene. I believe being on set you get to learn more than anything you can in acting school and I learned a lot from the actors on Ranngbaaz Phirse. I am also very good friends with the director Sachin Pathak. We went to the same college and I am so proud to see how far he has come.

6. You’ve worked mostly in Marathi films and TV. How did you prepare to get into the role of a Rajasthani woman?

The costumes helped me get in the role, but I think we really focused on getting the dialect right. That was one thing everyone on set wanted to nail. We wanted it to be authentic and it should feel like everyone is from Rajasthan. We had a Maharaja on set who made sure that not one syllable was off the track. I mean, I think he took the job way too seriously.

7. Which language are you most comfortable in Marathi or Hindi?

Marathi is my mother tongue so of course, I am more well-versed in it, but even Hindi is not that much of a challenge. Working on projects in Hindi is new for me so it keeps me on my toes. I love taking new challenges and I’m enjoying it.

8. The theme for the Rangbaaz Phirse is #NotBornACriminal. Do you feel it justifies the show?

Of course, the show is about a person who is pushed into becoming a gangster. However, there is always a choice where you can choose to not take up violence. But then again when you want to get out of the violence it is already too late. So this conflict is at the heart of the show and it is not a victory march promoting violence.

9. What is your lasting memory of working on the show?

There are so many and I cannot name only one. I feel blessed to be a part of Sachin’s (Pathak) debut directorial project since he is almost like a brother to me. Then of course working with Jimmy Sir is like a dream come true. I won’t even call it a dream come true because I still cannot believe it. I’ve done work in Marathi for so long, I really felt this show let me explore a different type of role.

For more information about the winners at High Five On ZEE5, click here.

Gul Panag At High Five On ZEE5: People At Airports Have Told Me They Loved Rangbaaz Phirse