Strawberry Shake: Sumeet Raghvan And Hruta Durgule Get Candid In This Exclusive Interview

Sumeet Raghvan and Hruta Durgule share their experiences working on the ZEE5 short film Strawberry Shake and their most memorable moments on set. 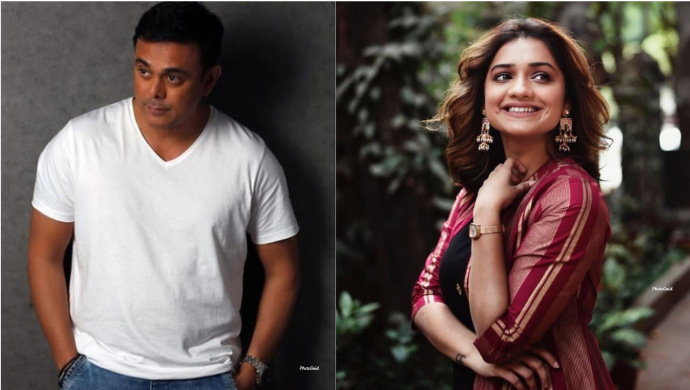 Excellent storytelling and moving performances, is the new mantra of filmmaking today. What is even interesting is how the world is taken over by this phenomenon called short-films, and how everyone is delivering gigantic messages in the most subtle storytelling. “Strawberry Shake” is one such film. An honest story told by the conviction that only reaches your heart, and makes you want to either run for a tissue box or have the ‘conversation’ . To tell us more about Strawberry Shake, and their personal experience on their craft, we had the two leading stars of the film – Sumeet Raghvan and Hruta Durgule gets candid with us.

You can watch the trailer for the short film here.

Representing the short film we had the star cast, who spoke to us about their different experiences and how it feels to be a part of a movie that has such an honest conversation. The two actors told us about their favourite on-set memory, and also why they love what they do!

The film is garnering a lot of appreciation and affection, how are you feeling?

Sumeet:  I love it! Who doesn’t like, love and appreciation? Right now because of the lockdown, you are anyways stuck up in your house, doing household chores, and having a release feels ecstatic in a time like this. So, it’s a great me.

Hruta: I will be honest, I was really scared on how the audience would take it as it is a father-daughter conversation on sex, but I am happy to be receiving such great feedback, so it feels amazing. Also, the audience is very quick at formulating an opinion based on what roles you do, so it was a tad bit scary, but I am glad to have received the kind of response for the film and performance.

How did the origin of the short film happen, what was the process, like?

Sumeet: I was shooting for a Marathi Film, and Shoneel the director of Strawberry Shake, was an assistant director to Satish Rajwade, and Satish has a fantastic team of these young, and talented people, all in their mid-20’s. I got along very well with these young lads. One fine day, Shoneel told me that he would want me to act in his short film, so I said great to send it to me. I asked him what the name of the film was, he said its Strawberry Shake. Honestly, I thought some Amarjit juice center guys wanted to make the film. But then, he came over and narrated the story and I was in complete awe. The way it was put across in the narration stage, I was sold at that very point!

Hruta: Shoneel was my senior in college, and I was a non-actor at that time, but I always knew Shoneel was into filmmaking. When he came to me with Strawberry Shake, I read the script and I was also given a narration, and there was absolutely nothing I could say “no” to, and I think the portrayal of a father-daughter relation is very special. I was very excited as I had a good script, and an amazing co-actor, and I was highly looking forward to playing the part.

How was it working with Shoneel?

Sumeet:  It was great to work with Shoneel as he knew exactly what he wanted as a director and writer. It was fabulous, working with Hruta. It was so refreshing to work with a young crew, I thought it would be chaotic, but it was so well organized that, I was really happy. Shoneel has great clarity, and a very bright future ahead, so it was wonderful working with him.

Hruta: He is also the writer of the film and it’s amazing to see the clarity of his thought. He was extremely confident about his characters, and he knew exactly how my character would look, speak , and react. She is already a girl who is on the edge, so if not portrayed correctly it can go either way, but the way Shoneel handled it was amazing, and it was wonderful to work with him. I knew I was in safe hands.

Do you relate to your character?

Sumeet: Absolutely, I have children who are in their early 20’s. There are four adults staying at my house. I completely relate to it. It’s not just that one needs to be cool, but you need to understand your children. You know, there are going to be times when you are not on the same page, and there will be misunderstandings, but I have logic to it – The age of the father and the child is same, because the moment your child is born, it is only then you turn into a father. Parents should try to treat their children as friends. There are times when we have to put our foot down, but that’s about it. You can’t always tell them what to do and sometimes I behave like a kid in front of them, and they have to tell me “Dad please behave yourself” so, one must bond with their children, and I understand and relate to Baba

Hruta: I don’t know, I do agree that I am mature but her clarity of thoughts is amazing, and I was surely not that clear at the age of 19. I would still be scared to ask my father for a condom. This was the most challenging part, since I as Hruta had many inhibitions. I may not relate to her, but I understand and want to support such kind of relations. If you can communicate with your parents like this, I feel half the battles are won there.

How was it working with your co-actor?

Sumeet:  I think she is one of the best talents we have, I have once seen her on a play and she is wonderful.I think that Hruta is going places because of the wonderful talent she is!

Hruta: I was thrilled and overjoyed ! The best part about working with such senior actors is that you get to see them performing live. As in you can watch how they work on the expression, and observe their craft closely. It was marvellous. We shot only for two days, and I was a little nervous as we had to develop the bond in those two days, but he was extremely sweet. It was a beautiful process.

Tell us something about your craft?

Sumeet:  I have 3 memorable characters, two are from theatre, one is Hamlet, and another one would be Knock-Knock Celebrity, there are only two characters in the play and it was all monologues. That was something that redefined acting for me and Hamlet of course, for its great writing by Shakespeare. Then definitely, Dr Sarabhai which stays with me wherever I go, so these three characters speak a lot about my craft.

Hruta: When I did my first serial, I wasn’t sure whether I wanted to be an actor. Eventually, in the process I realised, I love performing and being in front of the camera. I love playing different characters. More than a heroine or a star, I want to be recognised as a good artist. I love the process and variations, it’s amazing how one can camouflage into so many things, but still be the same person.

What was your most memorable on-set moment?

Sumeet:  We shot only for 10 hours. I feel my most memorable moment was seeing Shoneel transform as a director from an assistant, and he has a very bright future ahead. That was a very heartening moment for me and we had fun.

Hruta:  I think, it would be when we shot our last scene. It was memorable because we had a night shoot. It was one of the most difficult scenes to perform, and I was really scared. I had a lot going on at that time in my mind, so that was very memorable That scene is so special because we worked on every expression. We just put our hearts into that scene.

What is your “Strawberry Shake” message for the audience and fans?

Sumeet:  I would like to say, please don’t make a big issue about sex. Virginity is a no big deal, what matters is the feeling, and it’s your heart that you have to take care of, if you are going out and exploring. Of course, you have to be careful, that’s where guidance steps in – Parents should talk about sex and every other taboo associated with it. Kids are curious about sex, and they get their information from the internet or friends which is only half information. It should be treated more soulfully as it’s not about two bodies coming together, there is much more to it. Try to be sensitive and kind to each other.

Hruta: Sometimes, it’s our fears that stop us from even initiating a conversation. I strongly feel that they should try to talk, there is no hard and fast rule that it’s only parents who have to initiate the talk. I think if you break the ice you might explore more sides to your parents’ personality. I think it’s extremely trust oriented, and we have to win their trust assure them that we won’t take advantage of the freedom. So I would insist at least try to have a conversation with your parents.

You can watch this short-film only on Zee5

Svah! So Be It Review: A Taboo-Breaking Short Film Of The Before And After Of…

Half-Full Review: This ZEE5 Short Film About Suicide Will Lift Your Spirits,…

My Secret Terrius: Myths Vs Facts About COVID-19, Backed By World Health Organisation

Bamfaad On ZEE5: Here's How You Can Use The Word 'Bamfaad' In Your Regular Life