Designer Tarun, along with actress Anita Hassanandani, made an appearance on ZEE5 chat show, The Greedy Closet recently. 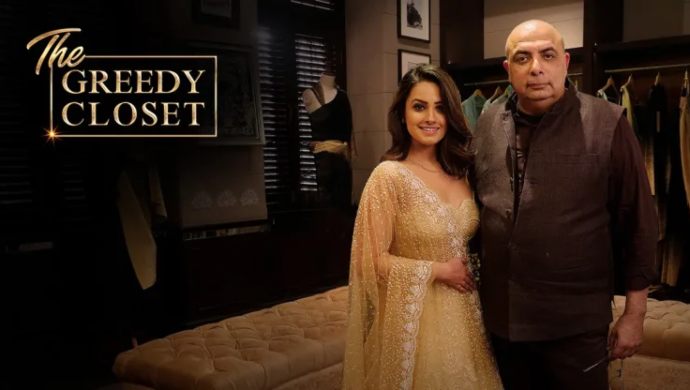 The world of fashion and television converge in a first on ZEE5 chat show The Greedy Closet. After stalwarts from the fashion industry, including Abu Jani – Sandeep Khosla, Gaurav Gupta, comes leading designer Tarun Tahiliani. Joining him on the episode is television and film actress Anita Hassanandani. While Tarun has given the fashion industry, globally, its many highs, he has been only soaring higher and higher. Meanwhile, Anita, who started out as a TV bahu, has escalated to the ultimate hottie oozing oomph with her transformation in the recent past. Tarun gives Anita a stunning makeover in the latest episode of The Greedy Closet while they discuss fashion faux pas and hits when in conversation with host Monica Dogra.

Tarun is the first ever Indian designer to show at the Milan Fashion Week, and since then, has shown all over the world. His signature style and impeccable craftsmanship have established him as the fashion industry’s coolest and longest reigning daddy. Having dressed scintillating actors, Tarun has also dressed the likes of Oprah Winfrey and Lady Gaga. Recalling his cherished memories of dressing bigwigs, he tells Monica, “I love Deepika Padukone from the beginning, she looks better and better. When I dressed Oprah, I was so excited, she was such a cool lady to dress. When Lady Gaga came to shoot, she just picked it up and went on stage and said, ‘I came with a plane full of clothes, and I found this thing.’ She performed in it and said, ‘Who?’ and my heart just stopped. I thought the dress would split open, as it wasn’t made to be worn when one rolled around on stage. She literally stopped the show and said I want to know who is Tahiliani.” In 1987, Tarun became a sensation as he started the first designer store that was showing collections of Indian designers. However, he didn’t use his name until 1995.

Speaking about her career graph, Anita revealed, “As far as my journey is concerned, I have been working since the age of 16. A little struggle here and there, which we actors have to go through. The industry has been really welcoming. But I am really happy with where I am today. For fun, I went for an audition and got selected instantly. I got paid a bomb and that’s when I decided this is where I got to be.”

Touching upon her fashion misses, the Lagao Boli starlet says, “I was overweight when I entered. I’d wear these shorts with my huge thighs. There have been many fashion faux pas, but we TV actors learn with time.”

For more, catch Tarun Tahiliani and Anita Hassanandani on The Greedy Closet below:

Which is your favourite creation of Tarun Tahiliani? Share with us in the comments box below.