#TeriHoGaiyaan Contest: Get Ready To Shake A Leg With Harleen Sethi And Melvin Louis

Copy the hook step done by Harleen and Melvin, and stand a chance to win signed merchandise! Read more about the #TeriHoGaiyaan contest here. 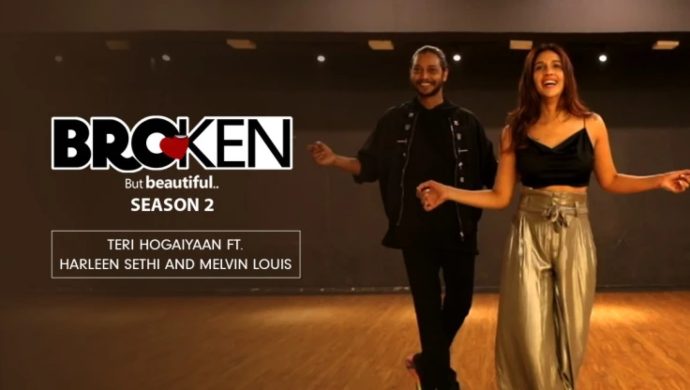 Harleen Sethi and Vikrant Massey-starrer ZEE5 Original and ALTBalaji Original, Broken but Beautiful Season 2 raked in rave reviews for more than one reason. The digital drama, which started streaming on the respective OTT platforms from 27 November 2019 onwards, continues to make the audience fall in love, with Veer and Sameera’s story tugging at theirheartstrings. Besides Harleen and Vikrant’s stellar stint as actors, supported by their amazing onscreen chemistry, the songs from the series are still ruling as  chartbuster numbers. Teri Hogaiyaan, a love ballad, sung, written and composed by Vishal Mishra, is being played on repeat by love-struck listeners. Listen to this heart-warming soundtrack on ZEE5 now:

For those of you who love the musical number, ZEE5 is coming up witht #TeriHoGaiyaan contest. Harleen, who enjoys a reputation for her flawless dancing skills, is all set to recreate the song with well-known choreographer Melvin Louis. The video of the same will be shared soon. To enter the contest, all you have to do is watch Harleen and Melvin’s video and copy their hook step. Send us your entries, and lucky winners stand a chance to win autographed merchandise as gratification, as well as a feature on ZEE5’s  social media handles. Rest assured, we bet you won’t be able to resist, but dance to the beats of it. Stay tuned for more details!

Are you excited to enter the #TeriHoGaiyaan contest? Let us know in the comments box below using the hashtag.

How Well Do You Know Ravi Dubey And Nia Sharma? Take The Rubaru Quiz To Find…

Sidharth Malhotra And Parineeti Chopra-Starrer Romcom Jabariya Jodi Is Now Streaming On ZEE5, Seen It Yet?